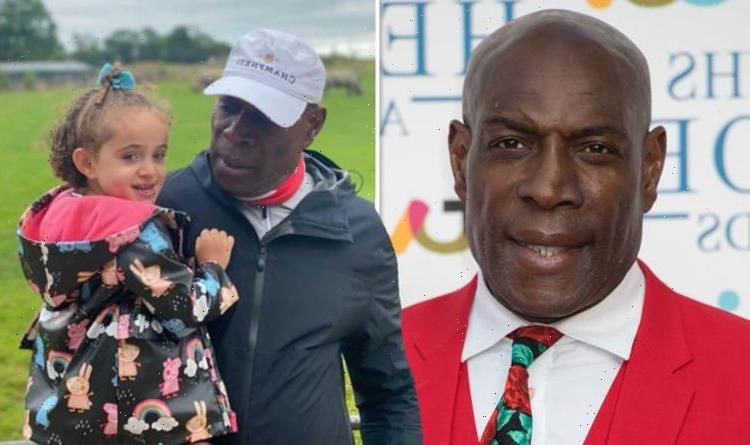 Frank Bruno, a proud father of four, introduced his cute two-year-old granddaughter Olivia to his fans on Twitter this week, a rare move from the retired boxer. The 59-year-old shared pictures of the pair spending quality time together at a zoo.

In view of his 159,000 followers, he wrote: “Morning this is Olivia who has been my shadow this week. How wonderful for me to hear her calling me “Grandad Grandad”.

“I am so proud life could not be better at the moment and to say that for me means something. Have a great Saturday.”

Frank followed up his post with another picture of him gazing over at Olivia, who he held in his arms.

He added: “Afternoon had some quality time this week with the family and we went to the Zoo!

“Hope you have a nice weekend tonight for takeaway I fancy a Chinese my mouth watering as I write this now have a good night.”

One wrote: “Your the man Frank, great to see you well and having family time.”(sic)

A second added: “I love your tweets champ. Keep up the positive vibes. Real inspiration.

“Hope you enjoyed the Chinese.”

A fourth penned: “What an AMAZING PHOTO mr Bruno.. you were my idol when I was growing up and you still are.”

In 2018, it was revealed he had become a grandad to Nicola’s daughter Olivia and Rachel’s daughter Amaya, in the space of 12 weeks.

Frank’s family insight comes after a brave interview he did with Fern Britton resurfaced on BBC today.

The boxer discussed his life from a schoolboy to a world heavyweight boxing champion.

He also candidly opened up about his battle with bipolar disorder.

First aired in 2012, the father-of-four admitted the biggest fight he had ever faced was with his mental health.

In 2018, he revealed that he hadn’t needed to take medication for three years after turning to fitness in a bid to improve his health.

Viewers took to Twitter today to praise him for his bravery.

One wrote: “I don’t normally watch TV on a Sunday morning but just watched Frank Bruno being interviewed.

“Really happy to see him and such an honest and personal account of his life.

“He has been through immense personal MH struggles, his laugh OMG how infectious it is.”

“What a brave and national hero you are @frankbrunoboxer it was a great watch and very inspiring as always with big Frank.”

What JonBenet Ramsey’s Dad Has Been Up To
Entertainment