Frank Bough dead: Grandstand presenter dies in care home at the age of 87 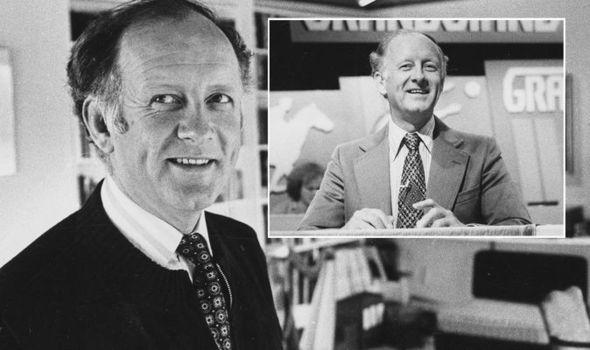 Former TV presenter Frank Bough, who was best known for his presenting for Grandstand and Breakfast Time TV, has died at the age of 87. The BBC legend’s death has been confirmed by a family friend.

Frank died last Wednesday in a care home, according to the BBC.

The star was best known for his BBC flagship sports programme Grandstand and his time one Breakfast time TV in 1983.

Former Newsround presenter Lizo Mzimba announced the news as he penned: “Frank Bough has died at the age of 87, a family friend has confirmed.”

A third said: “Always on the TV when I was growing up.”

Frank was known as a keen footballer, and became the presenter of Sportsview in 1964, taking over from Peter Dimmock.

After his stint ended in 1968, he moved on to host Grandstand, the BBC’s sports show which aired on Saturday afternoons.

Frank first joined the BBC as a presenter and reporter, presenting a new Newcastle upon Tyne-based show called Home at Six, which was then renamed North at Six.

In 1963 North at Six then relaunched when it became BBC Look North.

Frank married Nesta Howells after leaving the army in 1959 and they had three sons David, Stephen and Andrew together.

The BBC host met Nesta while he completed his national service. She stood by him during the scandals that marred his later career.

Frank was let go by the BBC when he became mired in a “sex and drugs scandal”, which involved “taking cocaine and wearing lingerie at sex parties”.