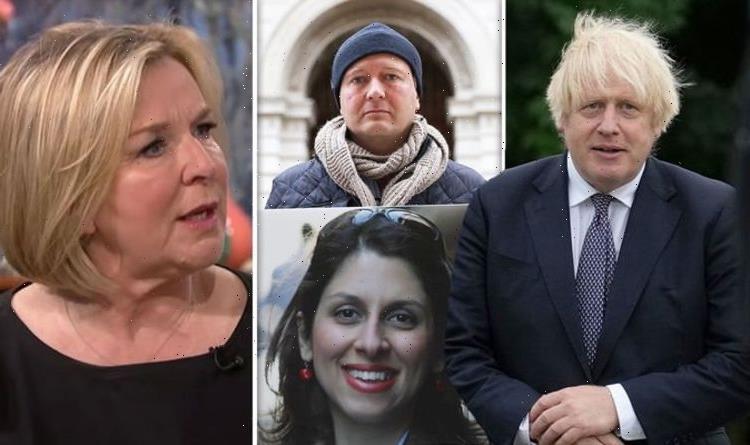 Richard Ratcliffe: UK needs to be 'braver' about challenging Iran

Nazanin Zaghari-Ratcliffe’s husband Richard said he’s determined to continue his hunger strike amid his campaign to get his wife home from Iran. The Iranian-British dual citizen has been detained in the country since 2016.

In September that year, she was sentenced to five years in prison after being accused of “plotting to topple the Iranian government”.

Her family were informed that the investigation relates to an issue of “national security”. Mrs Zaghari-Ratcliffe has always denied any wrongdoing.

Last month, she lost her latest appeal to be freed from jail.

Richard began protesting to put pressure on Boris Johnson to meet with Iranian delegates at the COP26 Summit and demand freedom for Britons detained in Iran.

Today marked his 17th day on hunger strike outside the Foreign Office, which has sparked growing concerns for his health.

Fern, 64, has urged the Government to step in and listen to his plea.

“From this point on it will get really serious for him. Retweet and make noise so it’s not in vain. #FreeNazanin.”

Carol Tate commented: “Fern I tweet the life out of this, seriously something needs to happen to get this wife, this mother back to her loved ones. It’s beyond sad.”

Dalkey Diva wrote: “Enough is enough. This family need to be reunited ASAP. This should not be ignored.

“It’s a family who’s everyday is unbearable and so needless. Let them be reunited please.”

Richard did the same outside London’s Iranian embassy in 2019 and refused food for 15 days.

Concerns have also been raised about the couple’s seven-year-old daughter Gabriella.

She was with Nazanin at the time of her arrest and has been living in England with her dad since 2019.

Yesterday, Richard admitted he felt weaker and acknowledged what the consequences could be.

“I don’t feel hungry but I do feel the cold more. It’s a short-term tactic.

Richard’s campaign has also been backed by the likes of Bill Bailey, Victoria Mitchell Coren and Claudia Winkleman.

“I hope the power of celebrity will help persuade the Government to do everything they can to unlock the deadlock,” he said of their support. “Claudia and Victoria were very supportive.”

In Oaxaca, a Meal to Celebrate a Pioneering Artist’s Legacy