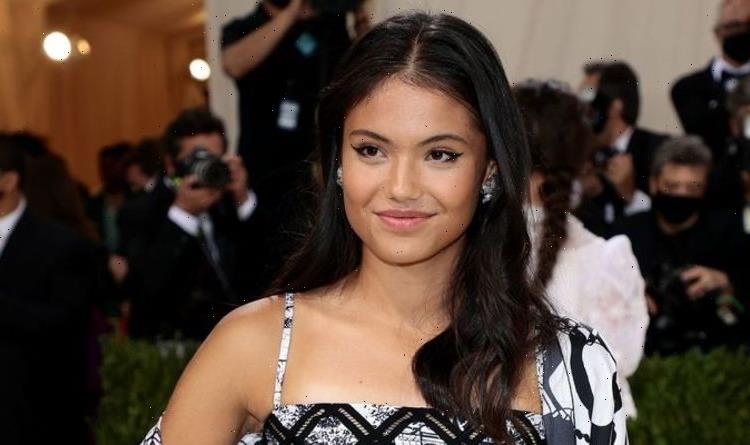 Two days after winning her first Grand Slam at Flushing Meadows, Raducanu rubbed shoulders with the likes of Rihanna, Justin Bieber and Lorde on the carpet of the Met Gala. The teenage sporting sensation wore a black-and-white Chanel ensemble and pearl body jewellery. Raducanu shocked the tennis world after entering the US Open as a qualifier, and winning the tournament by beating Leylah Fernandez of Canada in straight sets in Saturday’s final.

At just 18, the Bromley resident won the tennis major without dropping a single set throughout the tournament, only months after sitting her A-Levels.

She became the first British woman since Virgina Wade 44 years ago to lift a Grand Slam, and the first in 53 years to win the US Open.

Raducanu did the American morning talk show circuit on Monday, while in Britain, the tennis star also caused a stir.

Today on ITV’s This Morning Raducanu’s parents received praise from Vanessa Feltz who claimed that they must be “exceptional” people.

Ms Feltz said: “I would like a parenting book by her parents, because whatever they’ve done, it is amazing.

“They are exceptional people aren’t they.

The tennis star was born in Ontario, Canada in November 2002 to Ian and Renee Raducanu, who are Romanian and Chinese finance professionals.

The couple relocated to London when their daughter was two.

On Raducanu’s Met Gala appearance, Feltz added: “I thought she looked phenomenal when she was giving all her interviews on American tele in jeans and a cardi.

Don’t Miss:
Kate Middleton has ‘made no secret’ she wants fourth child [INSIGHT]
Alan Shearer ‘got stick’ from his wife over Queen meeting [ANALYSIS]
William and Kate ‘force for good in Scotland’ amid Indyref2 pressure [OPINION]

Such is Raducanu’s burgeoning popularity in the US, she was invited on ABC’s Good Morning America and the NBC Today Show on Monday morning.

Both programmes have a regular viewership of over three million.

Raducanu laughed as she told the presenters at ABC that even her “hard to please” mum and dad were impressed by her Grand Slam victory.

She said: “It was really nice to talk to them after I won.

“They were just so happy and proud of me and my toughest critics, and very, very hard to please.

“But yeah I got them with this one. They couldn’t resist.”

Raducanu’s parents could not be in New York to attend their daughter’s historic tournament run.

But the tennis player stressed that they had played a crucial role in helping her be resilient and handle pressure.

Raducanu, who’s shock victory catapulted her from 150th to 23rd in the world,
said: “I think from a young age I’ve always been brought up to have mental strength.

“My parents played a huge part in my upbringing and they were pretty tough on me when I was you, but it shaped the way I am.

“And I think now it’s helping on the biggest stages in the world, and Arthur Ashe stadium, when you really need it.”