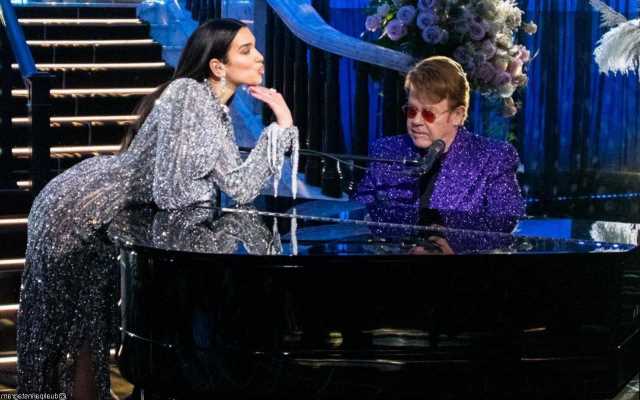 Lipa serves as the main performer at the event hosted by the British singer, while Lady GaGa makes a brief appearance to share a message about the importance of mental health.

AceShowbiz –Dua Lipa made musical performances at the 29th annual Elton John AIDS Foundation Oscar party and she looked stunning with her choice of outfits. Taking the stage together with the “Don’t Go Breaking My Heart” hitmaker, the “New Rules” songstress donned matching bedazzled ensembles with him.

The “Physical” singer looked gorgeous in a sheer Balenciaga long-sleeve gown with silver fringe on the sleeves and skirt. She completed her look with glass earrings and a giant diamond encrusted Faberge ring. Her duet partner added to the sparkles by donning glittering blue suit with black top underneath. The “Something About the Way You Look Tonight” hitmaker also sported his signature statement glasses.

At the event, Lipa served four songs “Levitating”, “Pretty Please”, “Don’t Start Now” and “Hallucinate” off her hit album “Future Nostalgia”. Aside from her sparkling dress, the 25-year-old delivered some of her performances in a velvet Balenciaga gown with long sleeves and a full mermaid skirt which was accompanied by a staggering Bulgari necklace.

Lipa was introduced as the main performance by John. “We are so excited to have Dua Lipa here tonight. She’s one of my favorite artists right now,” he said. “She is a multi-platinum Grammy Award-winning singer with over 4.5 billion album streams. She really is the biggest artist in the world right now and we are really honored to have her.”

The AIDS Foundation Oscar party was held virtually from London’s luxury Rosewood Hotel on Sunday, April 25. “How I Met Your Mother” actor Neil Patrick Harris served as the host. Besides Lipa, Lady GaGa, Cynthia Erivo, David Walliams and Eric McCormack also made their appearances at the event.

Making a surprise appearance, GaGa talked about the need of providing mental health services to those fighting HIV and AIDS. “This last year has taken a huge toll on the mental health of people all over the world. We have all had those days, weeks or longer where we might look okay from the outside, but inside is a different story altogether,” she said in a pre-recorded segment.

“Our mental health is fundamental to our physical health and this is especially true for young people fighting HIV,” the “Poker Face” singer continued. “It’s tragic to think a quarter of adolescents living with HIV don’t have access to the medical care they need because of depression or feeling overwhelmed. The reality is we won’t end the AIDS crisis unless we care for both mental and physical health.”

The event raised more than $3 million for the AIDS organization. On holding the party virtually for the first time because of the COVID-19 pandemic, John revealed, “It’s actually a pain. It’s not a pain, I’m joking. But I wish we could be there. It’s more fun to be there, but this is the only way we could do it so we are doing it.”