‘Downton Abbey in Delhi’ or ‘Poldark running The Real Marigold Hotel’? ITV’new drama was big on Diversity. But nearly all the main characters were white in Beecham House, by JIM SHELLEY

Beecham House had been labelled ‘Downton Abbey in Delhi’ – albeit mainly by ITV.

To be honest, this seemed like wishful thinking – for them and us.

The first episode felt more as if the Head of Drama who’d commissioned it had read the BBC’s most popular programme in the Sunday 9pm slot was coming to a close after the forthcoming series and experienced ‘a Eureka moment’ bordering on genius: just copy Poldark. 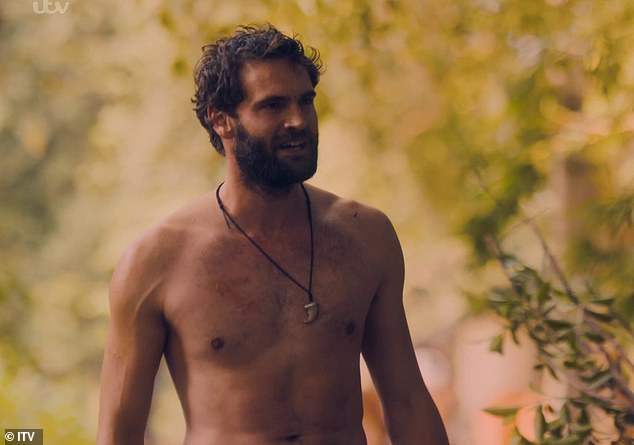 New drama: Beecham House had been labelled ‘Downton Abbey in Delhi’ – albeit mainly by ITV. To be honest, this seemed like wishful thinking – for them and us

Well not copy Poldark exactly, Poldark with a twist: namely Poldark in India. Or Poldark plus a territory with 850 million viewers.

Think the 1795 version of The Real Marigold Hotel run by Poldark, Taboo with someone nice than Tom Hardy taking on the East India Company (Poldark for instance), or Poldark directed by Bend It Like Beckham’s Gurinder Chadha.

So whereas Downton spanned members of the Crawley family and their many servants, Beecham House really only had one character.

And that character was… Poldark, or at least a decent impression: Poldark with a beard basically, or Poldark crossed with a colonial variation on the King of The North: Poldark played by someone from the Kit Harrington ‘Moody Laconic Mumbling’ school of acting (Tom Bateman).

‘John Beecham,’ he introduced himself to the stranger he’d just saved, having foiled a robbery by killing the bandit with one unerringly good shot.

The fact he laxly allowed himself to get hit back was only more heroic not less – not to mention exactly the type of thing Poldark would do. 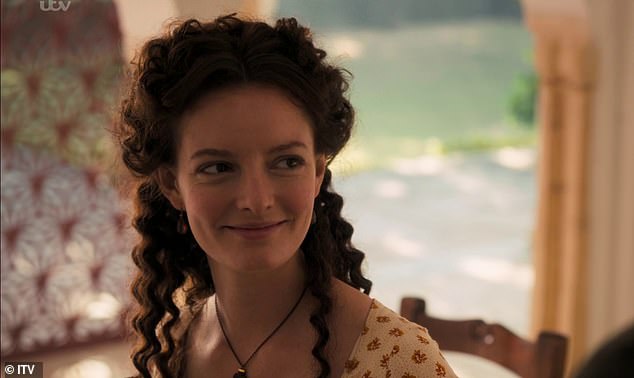 Copycat? Well not copy Poldark exactly, Poldark with a twist: namely Poldark in India. Or Poldark plus a territory with 850 million viewers

Occasionally, Bateman gave us a glimpse what Jon Snow would have been like if he’d been played by Matt Berry from Toast/The Year of The Rabbit.

‘See that my mother has all the comforts that an elderly lady requires,’ Beecham instructed a servant, practically stroking his hipsters’ beard to show he was thinking very seriously, without specifying what those comforts might be.

‘You have turned into a fine gentleman!’ she complimented her son seeing him for the first time in twelve years. ‘The beard sits most handsomely on your face.’

Well it would have been stranger – and altogether less handsome – anywhere else.

‘General, India belongs to neither the British or the French,’ he stated quickly reiterating: ‘General, I am not like my countryman.’ 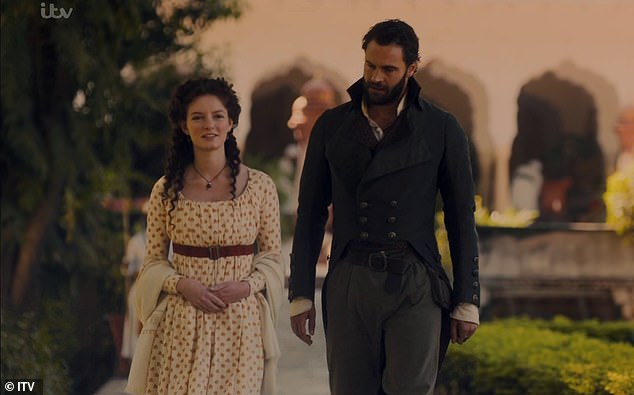 One dimensional? So whereas Downton spanned members of the Crawley family and their many servants, Beecham House really only had one character

‘General, that is a very fine ruby. Exquisite colour and clarity, although tragically cut without much regard to its structure.’

‘That is not the kind of knowledge I would expect from a soldier,’ observed Castillon.

‘General, I stopped being a soldier to trade fairly not pillage,’ Beecham countered, sounding as if he was just taking the Mick.

Bateman also seemed to have the same clause in his contract as Aidan Turner – requiring at least one piece of manual labour with his shirt off every episode.

Just as Captain Ross would occasionally, ostentatiously, dig for tin, the servants discovered Beecham bare-chested in the bushes, hacking furiously at the undergrowth with a machete for no reason whatsoever – except to show off his bullet wound and Bateman’s muscles. 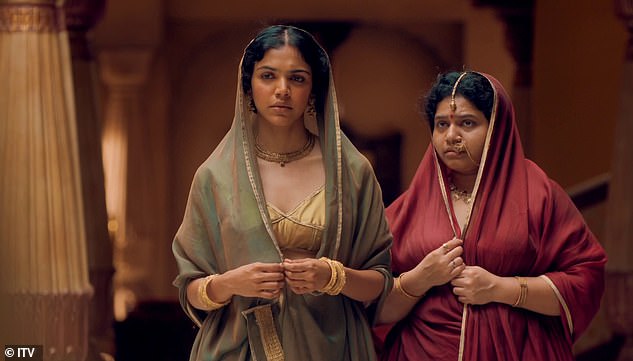 Inspiration: Think the 1795 version of The Real Marigold Hotel run by Poldark, Taboo with someone nice than Tom Hardy taking on the East India Company (Poldark for instance), or Poldark directed by Bend It Like Beckham’s Gurinder Chadha

‘There is not a single day when I don’t miss being a soldier,’ the brooding Beecham explained. ‘I miss the sweat.’

Well you are in India, you thought. It must be quite sweaty.

The early montages couldn’t have been more Delhi 1795: the city streets hummed with locals in turbans and extravagant moustaches, mischievous monkeys, white doves, elephants, or camels.

It will be a miracle if one of the five remaining episodes doesn’t feature a tiger loose in the grounds.

Much like Captain Ross, Beecham’s days as a war hero were behind him – along with his predictably brilliant career in the heinous East India Company.

(‘It was never the same after you resigned,’ his former colleague Samuel Parker told him/us.)

Accused that he was still working for it, he insisted: ‘I left the company years ago to trade. Nor am I any longer a lieutenant. I am just John Beecham esquire.’

Frankly we doubted that.

Sure enough, having settled in, Beecham’s problems were very much in the tradition of Captain Ross. 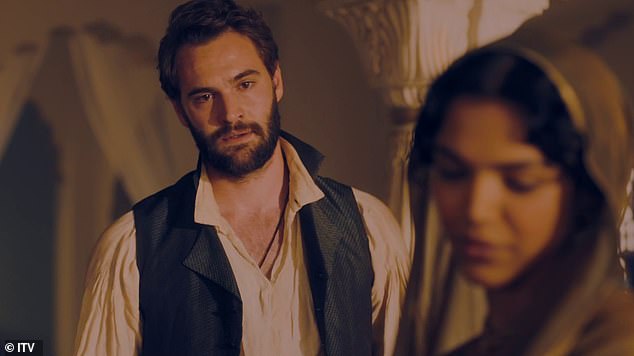 Just like Poldark! Beecham’s problems were very much in the tradition of Captain Ross

He’d arrived with a mysterious local beauty and a baby in tow, inevitably setting the staff’s tongues wagging.

‘The child it is not fully European’, ‘you cannot keep secrets in a house like this’ etc.

When she heard the child crying and then saw him carrying it, his mother asked all the questions we wanted to: ‘is he native?’ ‘Are you the father?’ ‘Who’s the mother?’ ‘Are you married?’

Apart from confirmation that ‘August’ was her grandson she/we didn’t receive any answers though.

Naturally, again like Poldark, every female that appeared was a potential love interest: his neighbour’s daughter Rashanara, his mother’s travelling companion Violet, and the woman seemingly raising his baby Chanchai (Shiriya Pilgaonkar).

At the inevitable party, he gazed at Rashanara’s governess like a lion eyeing a gazelle.

Predictably, in the manner of George Warleggan, his enemy General Castillon popped up, telling Miss Osborne ‘you look particularly ravishing this evening.’

Castillon was convinced Beecham had come to Delhi still in the employ of the East India Company.

It was just Beecham’s luck that his brother was working for them – on an expedition ‘on Delhi’s doorstep’ that India would view as ‘a direct provocation.’

Not only that, Daniel Beecham was a degenerate -drinking, smoking opium, and frequenting bordellos with a passion worthy of someone in Game Of Thrones. 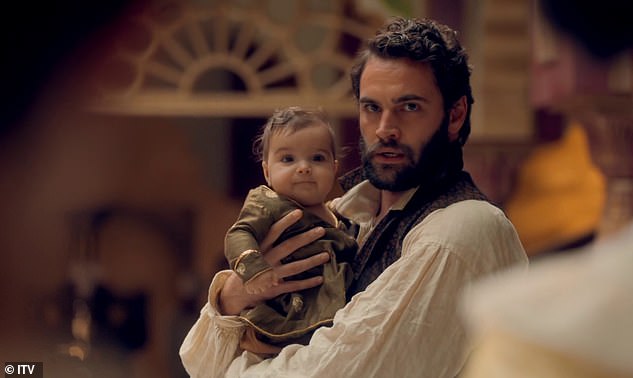 Mysterious: He’d arrived with a mysterious local beauty and a baby in tow, inevitably setting the staff’s tongues wagging

And naturally, their mother wanted to see her boy as soon as possible (in the next episode).

Our hero’s (brilliant) business plans were already being threatened by the locals – much like Poldark by Warleggan et al.

‘Only the emperor can grant a license to trade’, explained General Castillon, adding in his best ‘Allo Allo accent: ‘And ze British are never more treachereuse than when zey espouse virtue.’

‘Your imperial Highness I am your servant!’ insisted Poldark, I mean Beecham.

‘Then serve me. The Emperess’s birthday approaches. Find the perfect gift for her and you shall have your licence.’

Much like Captain Ross, Beecham’s virtuous-yet-rebellious credentials couldn’t have been stressed more heavily.

‘I also have India’s interests at heart not just my own,’ he boasted, causing Miss Osborne to pant: ‘that is admirable for these times.’

He had left the East India company ‘because I have a conscience’, denouncing 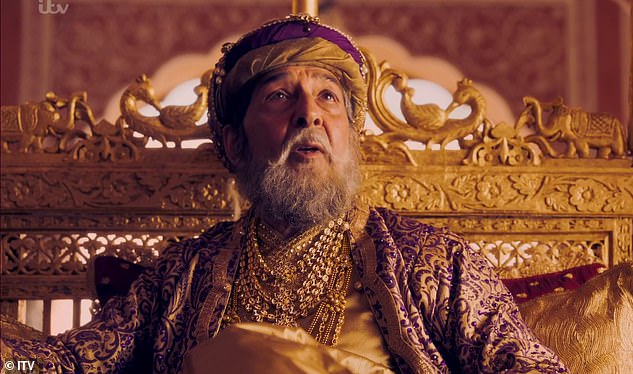 Threat: Our hero’s (brilliant) business plans were already being threatened by the locals – much like Poldark by Warleggan et al

‘Parliament taking the East India company to trial over their misdeeds was a charade!’ he blustered to Parker, looking even more handsome when he was angry. ‘The hypocrisy sickens me!’

Stating his case to the Emperor he laid it on with a trowel, denouncing the company’s policy for expansion as ‘shameful. They have no concerns beyond amassing wealth for their shareholders…I implore you, judge me not by my flag but by my actions. I love your country. I believe that India should be governed by Indians.’

He probably did too.

It was good to see ITV try something different – rather than yet another period drama set in the Home Counties – and Beecham House must have done wonders for the channel’s ‘diversity’ statistics, particularly regarding the number of extras.

Ironically, despite the hero’s ‘man of the people’ sensibilities and ‘India for the Indians’ speeches, you couldn’t help noticing that nearly all the major characters – John Beecham, his mother, brother, friend Samuel Parker, Miss Osborne, Violet, and General Castillon – were white.

Which Avengers Do Their Own Stuntwork and Which Ones Use a Body Double?
Entertainment