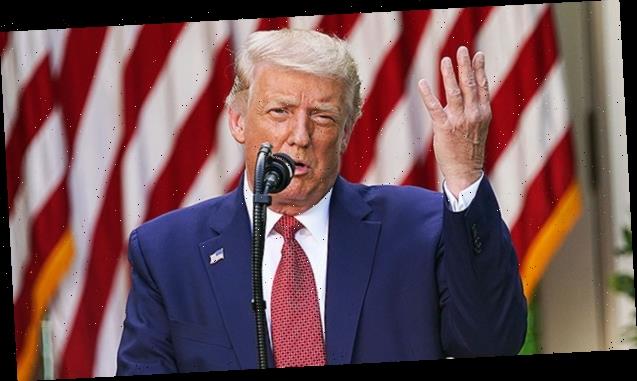 A day after triggering supporters to riot at the U.S. Capitol, Donald Trump has given a speech saying a new administration will be inaugurated on Jan. 20, and now folks are poking fun about his alleged ‘concession.’

What a difference a day makes. After telling supporters on Jan. 6 to “fight” Congress certifying the results of the Electoral College that would confirm Joe Biden‘s presidential win — triggering a massive riot at the U.S. Capitol — Donald Trump has seemed to concede his 2020 election loss. In a Jan. 7 speech, he didn’t use the word “concede,” or say he “lost,” but did finally say that “a new administration will be inaugurated on January 20th.” As a result of his 180 amid calls for the 25th Amendment to be used to remove Trump from office, Twitter is having a field day that he had to have somehow been coerced into giving his speech.

Trump has yet to officially concede the Nov. 3 election to Biden, vowing to fight until the end amid unfounded claims of widespread voter fraud. But after the violence at the Capitol building that has resulted in four deaths and calls for the 25th Amendment to be used to oust Trump, the 74-year-old said, “Now tempers must be cooled, and calm restored. We must get on with the business of America,” and that “My focus now turns to ensuring a smooth, orderly and seamless transition of power.”

A lot of viewers weren’t buying it, tweeting that he was being forced to give the speech by others. User @BTphoneXhome joked, “They shot the video on green screen so it would be easier to edit out Mike Pence holding a gun to Donald Trump’s head,” while Daily Beast Senior Entertainment Editor Marlow Stern tweeted, “I’m guessing Ivanka is dangling a bag of filet-o-fish sandwiches,” to finally get her dad to seemingly admit defeat.

Others wondered about the odd way Trump ended his speech, where he said, “To all of my wonderful supporters, I know you are disappointed. But I also want you to know our incredible journey is only just beginning.” User @du_veaux wrote, “that speech wasn’t a concession; it was an attempt to avoid charges. his last lines of ‘our journey is only beginning’ clearly shows he is not done w/trying to ruin us. he needs to be held accountable, impeached if possible if only to prevent his running in 2024.” @heather54915393 agreed and commented, “EXACTLY what I said. ‘our journey is only beginning’ only means he will spend the rest of his natural life trying to incite more dissent and criticizing everyone in government after him. He needs to be locked up.”

Many people just didn’t believe Trump and thought he was only playing nice for the moment. User @trumanoswald tweeted, “Nope I don’t buy it, as soon as they unlock his twitter he’s going to start up his voter fraud sh*t again. Everybody knows this coward is full of sh*t. @Fullmetal_Naru commented that “#TrumpConceded nothing. He admitted his term is ending, but not that he lost. He also lied about calling in the National Guard, which he refused to do. Pence had to call them himself. Full of sh*t to the very end.” Unless the 25th Amendment is used to remove Trump from office, he’s still the POTUS for the next 13 days, unless he’s impeached immediately by Congress.

I Put This TikTok-Famous, Transfer-Proof Lip Gloss to the Test and I'm Speechless