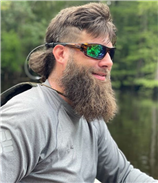 Having already murdered his tiny family dog two years ago, it appears as if David Eason has now set his sights on a couple brand new four-legged targets.

We’d say they should run for their lives.

You probably need some kind of explanation from us here, don’t you?

In a recent TikTok video, you see, Jenelle Evans shows off some new chickens David has purchased for the couple’s property down in North Carolina.

He’s all excited about them, too, much to his wife’s confusion.

“David’s like, ‘We got some more chickens!’ And I’m like, ‘I thought we were getting rid of the chickens?’” Jenelle says in the footage.

The former Teen Mom 2 cast member then turns the camera on her violent husband, who explaiins that they’re not getting rid of the chickens and that the spouses “need hens.”

When Evans notes to Eason that he “got two roosters,” David responds:

“Yeah, but I’m gonna caponize them.”

As David starts to explain this term — caponize, for those blissfully unaware, is a synonym for castrate, used specifically for male chickens — Jenelle stops recording.

Jenelle later joked in the comment section of her video that the brutal procedure was “too much for TikTok to handle.”

It’s too much for this celebrity gossip site to handle, if we’re being honest.

According to the Humane Society of the United States, caponizing is banned in the United Kingdom due to animal welfare concerns.

On many occasions, the birds/victims are starved and deprived of water to reduce the size of their internal organs before they undergo this gruesome procedure.

Now, look, we can’t speak on the conditions of David and Jenelle’s chickens and we can’t pretend to be experts on this controversial surgery.

But we can sadly say that it’s not remotely surprising David Eason would seem psyched to caponize a bird.

Back in April, Eason went off on his four-year old daughter, Ensley, after she pleaded with him on video NOT to kill any baby chicks at the family compound.

Even more infamously, he admitted to taking the little girl’s bulldog, Nugget, into the woods awhile back and shooting it dead.

Jenelle confirmed in the spring of 2019 that the canine was murdered after the it snapped at Ensley.

“He doesn’t put up with that and those are his beliefs,” Evans told Us Weekly at the time.

“He just took [the dog] and shot her in the woods … about two acres away from the house.”

Why didn’t he just give the dog away if he had a problem with it?

We have no idea.

Likely because David Eason is a troubled individual.

“It’s making me feel he’s very cruel and doesn’t have a heart on many ends,” Jenelle told this same tabloid over two years ago.

Evans briefly left Eason after this incident, which prompted an investigation from Child Protective Services and which led to Evans getting fired by MTV.

Jenelle even shared a tribute to Nugget after her husband killedd him, writing on Instagram:

“You still had a lot to learn and a lot to grow from your lessons.

What Does Mary Trump Think Of Her Cousins Ivanka And Donald Trump Jr?