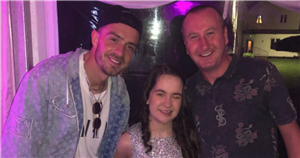 The 40 year old, who portrays the role of Kirk Sutherland on the popular soap opera, took to his Instagram feed to share a photo of himself posing with the teen alongside her older brother.

Andy could be seen wearing a dark grey patterned shirt alongside a pair of jeans as he stood next to the birthday girl, who donned a silver sequinned gown.

Hollie styled her brunette mane into curls and wore minimal make up for the occasion as she smiled from ear to ear while standing next to the actor.

Meanwhile her brother Jack, who recently met Love Island's Lillie Haynes at an after party, donned a white T-shirt with a Louis Vuitton blue bomber jacket and blue jeans.

Andy wrote in the caption: "Absolute pleasure to surprise @holliegrealish one of the biggest @coronationstreet fans I know tonight for her 18th Birthday," followed by a red heart emoji.

Hollie immediately commented underneath the picture: "You’ve made my night complete, thank you so much for coming, hopefully I’ll see you soon xx," followed by a kissing emoji.

To which Andy, who recently shared a peak inside her stylish family home, responded: "@holliegrealish you’re more than welcome Hollie it was lovely to finally meet you, enjoy your birthday tomorrow and I’ll see again soon xx," with a red heart emoji.

Fans were also quick to comment on his sweet gesture as one person said: "So lovely Andy, I bet it made her night! Hope you had a fab time xx".

Another said: "You are an absolute legend my friend x".

Meanwhile, one fan decided to hit out at those who complained he was standing next to a Manchester City player as they said: "@andywhy36 what a lovely thing you did Hollie looks so happy. Oh and for the negative Normans Jack is a person not a team who has helped to make his sisters night complete," followed by two red heart emojis.

It comes after it was recently reported that Jack and model Sasha Attwood, who are believed to be romantically involved, are said to be on "different pages" when it comes to their future together.

A source told OK!: "She's keen to settle down and he wants to have fun. They've been in each other's lives since they were kids.

"He got so much attention from women during Euros, it would be hard not to go to his head."

For all your updates on Andy Whyment and Jack Grealish, sign up to our daily OK! newsletter.

Jennifer Lopez went to Venice for the D&G show: will she stay for the film festival?