Stephen Colbert suggested Tuesday night that with Amazon’s acquisition of MGM Studios, Jeff Bezos could find himself in a position to release old footage of former president Donald Trump allegedly making racist comments on “The Apprentice.”

“The latest Bezos news-os is that Amazon is nearing a deal to buy the Hollywood studio MGM,” Colbert said in his monologue, calling the deal — confirmed Wednesday morning — “such a billionaire move.”

“The Late Show” host went on, “The price tag is almost $9 billion and would give Amazon a treasure trove of showbiz titles.” Colbert then pointed out that insiders have valued MGM at only $5 billion, then questioned why Bezos “really wants” it. 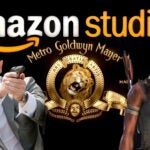 “So, why would one of the world’s richest men pay almost twice the value for a struggling movie studio that recently went bankrupt? Well it could be that Jeff Bezos has an ongoing feud with the former president,” Colbert enthused, though he still wouldn’t say Trump’s name. “Guess what? All the outtakes from ‘The Apprentice’ are owned by MGM. Holy mother of DVD extras! The private footage of a TV billionaire is going to belong to an actual billionaire. See, for years, there have been allegations about outtakes from ‘The Apprentice’ where the Slob Father [Trump] uses racist language, including by Tom Arnold, who says he saw it personally.”

Rumors of these tapes have swirled for years, with Arnold insisting he’s seen compilations of Trump saying the n-word, r-word, c-word and “every bad thing ever.” (Staffers have cast doubt on the existence of the footage.)

Colbert celebrated that in the near future, Bezos could “release the most racist thing in the MGM catalog other than ‘Gone With the Wind.’”

“I am here for it!” he declared. Watch above, via CBS.