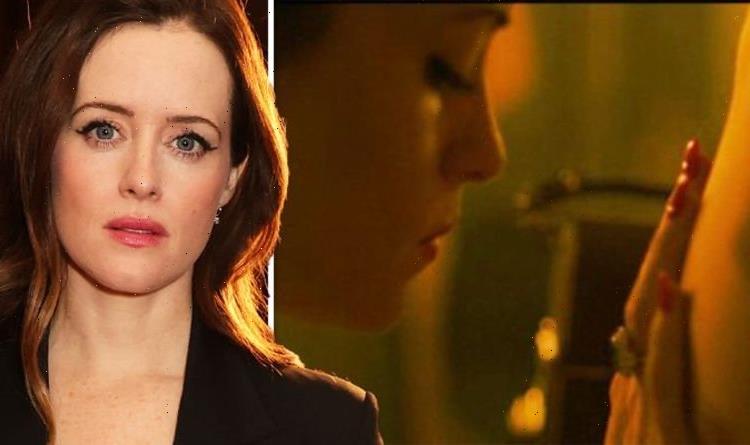 Claire Foy explains why she dislikes the phrase 'slut-shaming'

The Crown actress Claire Foy has caused a stir amongst viewers as she recreated the Duchess of Argyll’s steamy “headless man” photo in the second episode of the BBC’s A Very British Scandal last night. The star, 37, who plays Margaret Argyll in the mini-series, recreated the explicit set of snaps in the most recent episode of the BBC programme in a few steamy scenes.

In the second episode which aired last night, Foy entered her bathroom to find a naked man there.

Looking stunning in a black set of lingerie and pearls, the Duchess handed the mystery man a camera before seductively running her hands over his chest and lowering herself until she’s out of shot.

A Very British Scandal is the follow-up story to A Very English Scandal which revolved around the actions of politician Jeremy Thorpe in the 1960s.

While set in the same time period, this latest drama focuses on Ian Campbell, the Duke of Argyll (played by Paul Bettany), and his wife Margaret (Claire Foy) the Duchess of Argyll.

Viewers soon took to Twitter to relay their thoughts on the steamy scenes.

Another commented:”Is there anyone more beautiful than Claire Foy?

A third social media user wrote: “Claire Foy makes me want to dye my hair back to brunette and sport my red lippy every single day

The Duchess is known for a leaked photo scandal which saw her set of explicit pictures used as evidence against her during her divorce from the 11th Duke of Argyll.

After reportedly breaking into a cupboard in their home, the Duke found explicit snaps of his wife in her signature pearl necklace, accompanied by another man.

The content of this cupboard later became the focus in the divorce case, as well as being featured in the national newspapers.

Like in A Very British Scandal, in 1963, the Duke did accuse his wife of having affairs with 88 different men.

He went on to provide evidence at the trial in the form of Polaroid photographs which he had taken from the locked cupboard.

Some of the pictures showed the Duchess naked as well as performing a sexual act on someone who famously became known as the “headless man”, as his identity wasn’t revealed.

The Duke allegedly went to the doctors to prove his “lesser dimensions” to the man in the picture so it was known she had cheated on him.

Despite the identity of the “headless man” remaining a mystery for years, a 2000 documentary identified him as Winston Churchill’s son-in-law, Duncan Sandys.

Born in 1912 to a Scottish millionaire, Margaret Whigham was a British socialite who already had two children.

She married the Duke in 1951, four years after her divorce from her first husband Charles Francis Sweeny.

The couple tied the knot and lived in luxury, going on extravagant holidays including skiing in St Moritz and sailing in the Bahamas.

But 12 years later, he filed for divorce upon suspecting his wife of infidelity.

It took four years for the verdict to be reached after the Duke filed for divorce.

It was eventually granted on the grounds of adultery.

In 1993 Margart died penniless after suffering a fall in a nursing home.

If Your New Year's Resolution Is to Play a Dead Body on Law & Order, Here's How
Entertainment