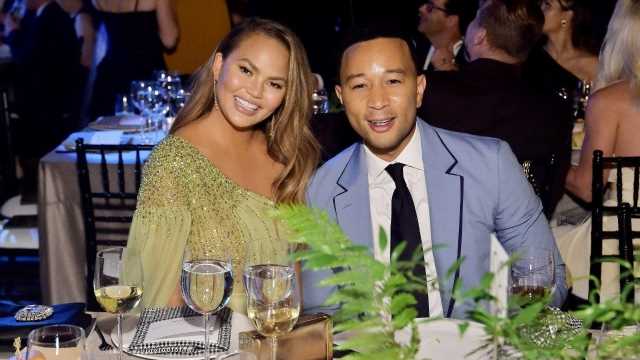 John Legend and Chrissy Teigen are feeling nostalgic! The couple will celebrate their eighth wedding anniversary in September, but on Tuesday, they revisited the site of their 2013 honeymoon — Portofino, Italy.

“We spent the evening in Portofino, the first stop on our honeymoon in 2013. It’s still magical. ❤️🇮🇹” Legend captioned a sweet photo giving his smiling wife a kiss.

The couple brought their two kids along for the Italian getaway, with Legend posing with his 5-year-old daughter, Luna, in the picturesque seaside town.

Teigen has also been sharing photos of the couple’s trip abroad, posing on a balcony with her hubby in Florence, Italy, earlier in the week.

“I love you. Luckiest girl ever,” she captioned the pic.

She also posed in front of the Leaning Tower of Pisa, writing, “I feel like it’s getting straighter,” and shared a pic of her 3-year-old son, Miles, happily munching on some pizza.

It’s been a difficult few months for Teigen, who has been involved in a recent cyberbullying scandal.

The controversy surrounding Teigen began when a number of her tweets resurfaced in May, as Courtney Stodden alleged in a Daily Beast interview that Teigen used to send her disparaging comments on social media.

Teigen subsequently publicly apologized to Stodden, calling herself an “insecure, attention seeking troll,” took a break from her social platforms, and exited her role on Never Have I Ever amid the controversy.

Last month, Teigen took to her social media to issue a lengthy apology. In her essay, Teigen said she’s “in the process of privately reaching out to the people I insulted.”

“I understand that they may not want to speak to me,” she wrote. “I don’t think I’d like to speak to me. (The real truth in all of this is how much I actually cannot take confrontation.) But if they do, I am here and I will listen to what they have to say, while apologizing through sobs.”

She has also denied claims by designer Michael Costello, who alleged Teigen bullied him online.