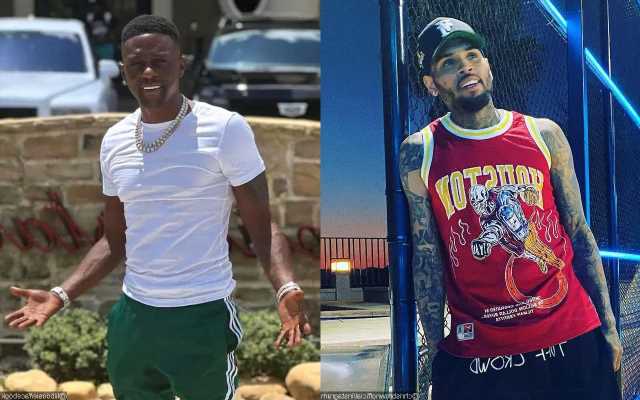 Chris Brown Praises Boosie Badazz for Being the Realest ‘GOAT’

The ‘Till the Wheels Fall Off’ crooner previously extended his gratitude to the Baton Rouge hip-hop star for comparing him to the late Michael Jackson during an interview.

AceShowbiz –Chris Brown is showing Boosie Badazz (Lil Boosie) some love. Making use of his Instagram page, the “No Guidance” rapper praised the “Wipe Me Down” rapper for being the realest “GOAT.”

Chris’ statement has drawn mixed reactions. “He sure is !! Boosie Boo,” one person commented, while another exclaimed, “I agree HE FUNNY ASF.” A third individual echoed the sentiment, “Yes he mad entertaining.”

Someone else, in the meantime, wondered, “The goat at giving funny interviews? I agree. The goat about asking his followers for help. I agree.” A different user then opined, “Maybe he said that because Bossie is Always his Authentic self whether you agree with his personal views or not.”

Back in October 2021, Chris let Boosie know how he did “appreciate” him after being compared to the late Michael Jackson. “Appreciate the love MY BROTHER. I’m thankful I was able to witness MJs greatness and HE inspired me to be CHRIS BROWN,” the ex-boyfriend of Rihanna wrote on Instagram.