Home » Celebrities » Britney Spears: I’m Gonna Tell the Court MY Side of the Conservatorship! 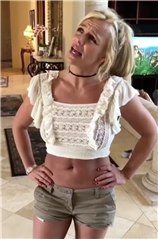 Britney Spears: I’m Gonna Tell the Court MY Side of the Conservatorship!

The battle over Britney Spears’ conservatorship is continuing to heat up.

Recently, her dad launched a smear campaign against her mom for questioning his financial decisions.

Britney has asked the court to at least allow her to directly address her plight, in her own words.

The court has agreed to hear what she has to say about her own life and confinement.

On Tuesday, there was a hearing in Britney’s case in Los Angeles Superior Court.

“Britney wants to address the court directly,” he shared.

Britney’s attorney also emphasized that Britney hopes that this will happen soon.

Ideally, even, within the next several weeks.

While the timing doesn’t quite line up, she’s getting her wish nonetheless.

The new hearing will take place on June 23.

(Yeah, that’s nearly two months from now, so not quite in the requested timeframe)

At that time, Britney will be permitted to address the court in her own conservatorship case.

Britney and her notorious father Jamie Spears have not spoken since last summer.

In fact, it was last year when Britney’s attorney told the court how she really feels.

Britney, he revealed, is afraid of her father, and refuses to perform while he holds her conservatorship.

Jamie was almost universally despised by Britney’s fans even before he allegedly attacked one of her sons.

Fans have long held the opinion that the conservatorship is deeply suspicious.

What’s more is that even if it truly is necessary for Britney’s well-being, Jamie should have nothing to do with it.

That has been, from the beginning, Britney’s positions.

Reports say that even in early 2008, she realized that the conservatorship would happen.

But she repeatedly fought to have her father not be involved … sadly, to no avail.

But on her Instagram, Britney is thinking more positively — and about her body.

She recently shared a cute short video of her legendary body.

Alongside it, she shared what is on her mind in a caption.

“In the past two weeks I’ve said that’s it … I have got to get in shape,” Britney began.

She wrote that it was on her mind “considering my boyfriend’s body is hotter than hot!!!!”

“I was like S–T where the hell am I supposed to start,” Britney acknowledged.

“So I run a lot and try to eat clean and be mindful with my food,” she described.

“Unless I cheat,” Britney admitted, “like last night when I ate a container of peanuts!!!!”

“And then it hit me …” Britney remarked.

“But,” Britney shared, “I felt too vulnerable in my skin being this small!!!!”

“I didn’t like it so I started boxing so now I feel stronger too!!!!” Britney announced.

“We all have our own ways to work on our bodies,” she acknowledged.

“And I respect that,” Britney affirmed, “cause we all should …”

“I just hope I don’t see an @innout burger any time soon,” Britney then joked.

Obviously, many people would find a fitness plan that excludes burgers to be a dealbreaker.

But we’re glad that Britney is doing whatever she feels that she needs to for her own well-being and happiness.

Cops Say Kodak Black Shooting Was Targeted Hit, Threats Made Against Him