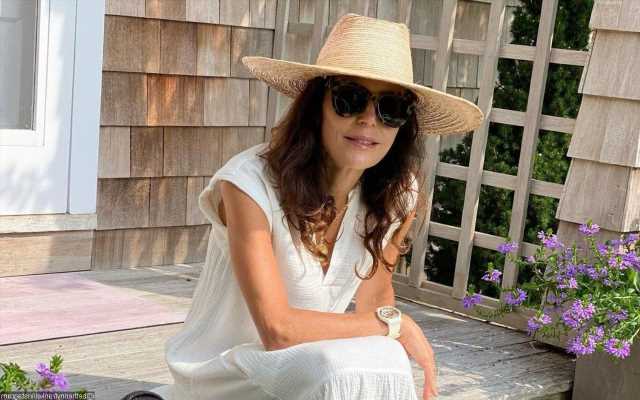 When sharing messages about body positivity, the ‘Real Housewives of New York City’ alum claims that ‘filtering yourself into someone fictitious is actually damaging to girls’ and women’s self esteem.’

AceShowbiz –Bethenny Frankel is not a fan of using beauty filters on social media. While sharing an unfiltered picture of herself in underwear and sports bra, “The Real Housewives of New York City” alum encouraged her fans to be “truthful and real” to themselves.

The TV personality posted the mirror selfie on Instagram on Tuesday, August 10. She first kicked off her caption by stating, “If I were a ‘filterer’ I would have gotten rid of my lines and my dark circles, but this is me at 50. #zeroglam #zerofilter.”

“Why do I mention this all the time? Because I think it’s important for young women to know that being flawed is truthful and real, and that filtering yourself into someone fictitious is actually damaging to girls’ and women’s self esteem,” she explained further. “It’s courageous and beautiful to be real at any age.”

“I realize that fake and filtered sells,” the author concluded her post. “But I’m happy over here with my followers who appreciate the difference. #NationalShapewearDay @skinnygirlbrand shapewear.”

The former “Bethenny Ever After” star has since been applauded by her fans for her messages of body positivity. One person gushed, “Yay! Love this! Love your transparency!” Another individual praised, “The realesttttt.” A third replied, “Love this Bethenny… real true and authentic …. You’re inspiration to many women, love and light.”

Some others, however, wondered whether Bethenny has had plastic surgery. “Is plastic surgery a filter?” one user asked, to which the reality star replied, “I wouldn’t know…ask someone who has had it.”

Someone else commented, “You look fabulous.. but made lose the boob job and Botox .. hair color then tell women and young girls how beautiful being real is. I’m not hatin im just sayin.” In response, Bethenny wrote back, “I don’t have hair color in. My roots are gray & I haven’t had a haircut in a very long time. I had a lift years ago Bc I had very saggy boobs since high school.”

This was not the first time for Bethenny to weigh in on beauty filters. Back in August 2020, she posted an unfiltered selfie on Instagram and noted, “The more I see photos on social media that are filtered, contoured, eyelashed, extensioned, & retouched – the more important it is to post #nofilter, real, everyday photos. I want to show our daughters (and sons) a realistic female image. THISiswhatilooklike #thisisme #unfilteredse.”

Doctor reveals why women should NEVER pee in the shower