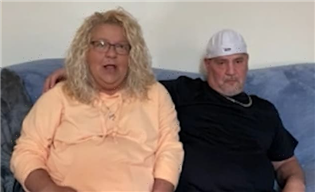 The self-styled “Baby Girl” is still technically, on paper, married to Usman Umar.

It’s a bit of a mess, but that is no surprise to fans.

Lisa is now explaining exactly how all of this came to be.

Baby Girl Lisa Hamme and her husband, Tracey, sat down for a remote interview with In Touch Weekly.

Many fans had missed earlier details on their relationship and interpersonal history.

Lisa reminded everyone that the two of them met in elementary school.

Lisa and Tracey were in fifth grade when they met.

Lisa revealed that Tracey actually got her into trouble, and sent to the principal’s office.

That is not something that one easily forgets.

But they did not always believe that they were destined for one another.

Lisa and Tracey ended up reconnecting in 2014.

However, they did not really begin to date again until September 2020.

“He proposed twice to me,” Lisa shared.

“And with COVID,” she detailed, “things got pushed back.”

It even sounds like her appearing on 90 Day Fiance interfered with the timeline.

“And,” she recalled, “I talked with my manager and Tracey.”

Lisa shared: “And we decided we were going to the altar straight to get married because we could not wait anymore.”

As we reported, Lisa and Tracey held their wedding ceremony on April 27.

The two have been enjoying married life for the week and a half since then.

The actual buildup to the wedding, though, was nerve-wracking.

Lisa shared that she had pre-wedding jitters before the big day.

It was her daughter, she added, who provided a dose of humor to take the edge off.

“We were a little bit nervous …” Lisa began.

“And she’s cracking jokes and laughing, we’re having a good time,” Lisa detailed.

“We’re sitting there just cracking up waiting for the judge to call us,” she described.

Anxiety is normal. In situations like that, laughter can be the best medicine.

Lisa and Tracey did not follow their wedding with a reception.

In a pandemic, holding a traditional wedding reception is essentially an act of bioterrorism.

That said, they might consider holding one or a similar celebration when it’s responsible.

“After we got married,” Lisa described, they “changed clothes, grabbed our bags and we were out of here.”

They celebrated by traveling to the Pocono Mountains in Pennsylvania for their honeymoon.

Lisa raved: “It was absolutely stunning.”

She did throw some (prompted) shade at Usman more than once.

For example, she said that she would not play any of her ex-husband’s music at her eventual reception.

That said, Lisa stated that she does not regret her marriage to Usman.

She characterized it as “part of her journey,” stating that she does regret things “they didn’t show” that she learned in Nigeria.

What those things might have been is anyone’s guess.