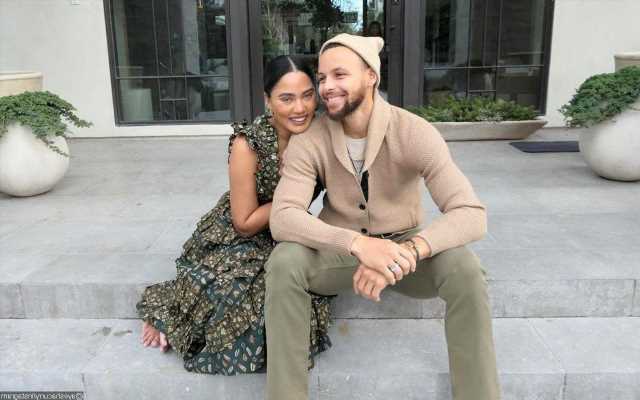 The ‘Ayesha’s Homemade’ host sets the record straight after it was reported that she and her basketballer husband enjoy having trysts with other people while keeping a perfect family image for public.

AceShowbiz –Ayesha Curry has finally broken her silence on reports that she and her husband Stephen Curry may have an open marriage. After remaining mum despite the wild speculation, the cookbook author has shut down the rumors once and for all.

The mother of three gave her sharp response to the open marriage rumors when someone criticized her based on that. On Monday, January 10, the Canadian-born TV personality shared a snap of Curry posing with the backdrop of sunset on the ocean for the cover of GQ magazine. Gushing about her hubby, she wrote in the caption, “Good gracious God almighty @stephencurry30 … my baby’s @gq cover shoot.”

A naysayer was quick to criticize Ayesha, accusing her in the comment, “But yet you still want an open relationship smh. If I were him you woulda been sent to the streets already.” Noticing this, the 32-year-old wrote in the reply, “Don’t believe everything you read.” She continued to fire back, “Do you know how ridiculous that is? Don’t disrespect my marriage like that. Please and thank you.”

The naysayer apparently believed recent reports that said Ayesha and Stephen allegedly had a non-traditional relationship. Quoting Deuxmoi, MSN said that the Golden State Warriors player and his wife, who share three children together, enjoyed doing their own thing within the scope of their marriage. Their relationship was additionally described as an “open marriage” with “side-hookups.”

“Have it on good authority that this well known NBA couple aren’t as faithful in love as their social media and image make them out to be! They both have side hookups and flings but keep it very private to keep up the perfect family image they show to the world. I was shocked to learn, they’ve been together for so long,” an anonymous tipper told the Instagram blog.

Ayesha previously said her religious belief was the foundation of her relationship with her husband. “My whole goal was to do the things I wanted to do, but all while being a light for Him,” she said in 2019.