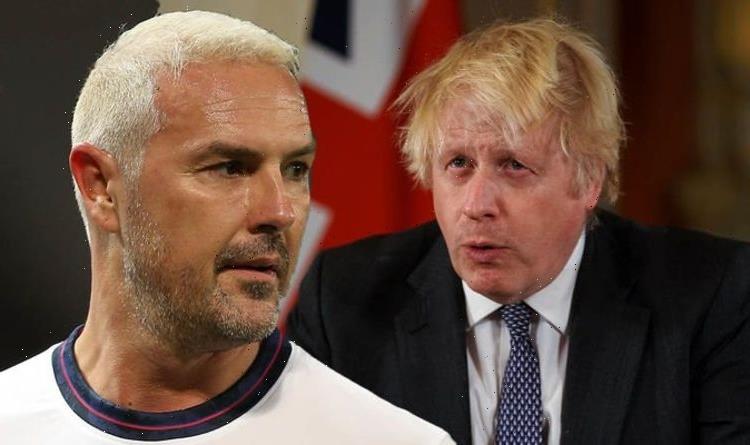 Paddy McGuiness, 48, has taken to Twitter to hit out at Boris Johnson, 57, as he scheduled his announcement this evening at the same time as Top Gear. Top Gear’s new series airs every Sunday on BBC One, with Boris using the beginning of this slot for his announcement.

No regard to Top Gear starting!

In view of his 552,800 Twitter followers Paddy slammed Boris for his “incompetency” in his duties and now not having regard for Top Gear.

He penned: “Since Boris Johnson became PM we’ve put up with cronyism, lies, incompetency, Brexit bluffs and all round shit housery.

“Man’s scheduled a press conference for 8pm tonight with no regard to Top Gear starting! #bojogottogo #topgear.” (sic)

Many took to the Top Gear hosts comments to add their opinion to the announcement.

Boris announced that he will be launching an “emergency” Covid booster campaign to try and combat the “tidal wave” of cases of the Omicron variant.

The Prime Minister unveiled a plan called “Get Boosted Now” to offer a booster jab to every eligible adult in the UK by the end of the month.

To hit this target Number 10 said the National Health Service will have to offer jabs to 18 million people in as many days, which equates to one million a day.

Boris said the huge effort, which will see the Army divide the country into regions, was necessary to preserve the country’s hardwon freedoms from the coronavirus pandemic.

The Prime Minister said while addressing the nation: “No-one should be in any doubt: there is a tidal wave of Omicron coming.

“And I’m afraid it is now clear that two doses of vaccine are simply not enough to give the level of protection we all need.”

He believes that the new national emergency effort will protect Britons from the new variant and stop the risk of another lockdown.

Doctors and nurses will be transferred over from non-urgent work in hospitals to assist with the booster programme.

He said that clinics would be “extending opening hours so clinics are open seven days a week, with more appointments early in the morning, in the evening, and at weekends”.

The Prime Minister ended his speech, linking freedoms to why you need your booster.