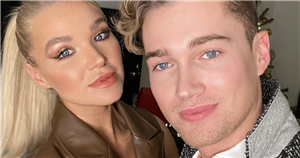 Abbie Quinnen has spoken out on the horrific and hurtful comments she's been receiving from the public after getting third degree burns following an accident.

The 24 year old sustained her injuries after a video hack she and her former Strictly Come Dancing boyfriend AJ Pritchard, 26, were filming went wrong.

Speaking to Victoria Derbyshire on BBC Radio 2's Jeremy Vine Show, the dancer explained that while many people have been sympathetic towards her situation, others have sent her vile messages, including one who said she should have "burned to death".

Abbie also said she'd been told by one person that she's "now going to look like a waxwork model," as well as another who said: "Don't go near your niece and nephew, you'll scare them".

"It's so horrible, I just think it's really sad and I feel a bit sorry for them," Abbie said about the keyboard warriors.

Discussing how she felt during the accident, which took place in mid-March and left her needing three skin grafts, Abbie said: "I was in shock and thinking, how can I survive this?

"I rolled on the floor and that didn't work, so I grabbed a heavy blanket and started trying to put out the flames that way. AJ was getting damp towels in the meantime."

While the entire ordeal only took a few seconds, the star explained it felt as thought it lasted "a lifetime".

It comes after Abbie recently admitted she tried to push her boyfriend away while she dealt with the trauma of the accident.

Speaking to Fabulous Magazine, Abbie recalled: “I did everything to push him away from me. I felt so traumatised, I hit out at the person who loved me the most.

“He was by my side from the moment I came out of hospital, cooking for me, rubbing creams and moisturisers into my scars four times a day, and telling me I was beautiful, not letting me lift a finger. He was keeping so calm and upbeat for me, but I was an emotional mess and I wanted him to be as devastated as I was.”

Five days after the accident, Abbie looked in the mirror, following the advice of a trauma therapist, but she said she couldn’t stop crying for hours after. She revealed: “I didn’t even recognise myself.

“All I could see were burns all over my face. I didn’t know if they would heal, I just didn’t want to look at myself or let anyone else see me.

“It was during lockdown, but the doctors decided I needed to have one visit. AJ came in to see me, but I refused to allow him into the room. I couldn’t bear for him to see me. I also told him I wasn’t coming home; I was going to move back in to my mum’s. I just wanted to hide from the world – from everyone.”