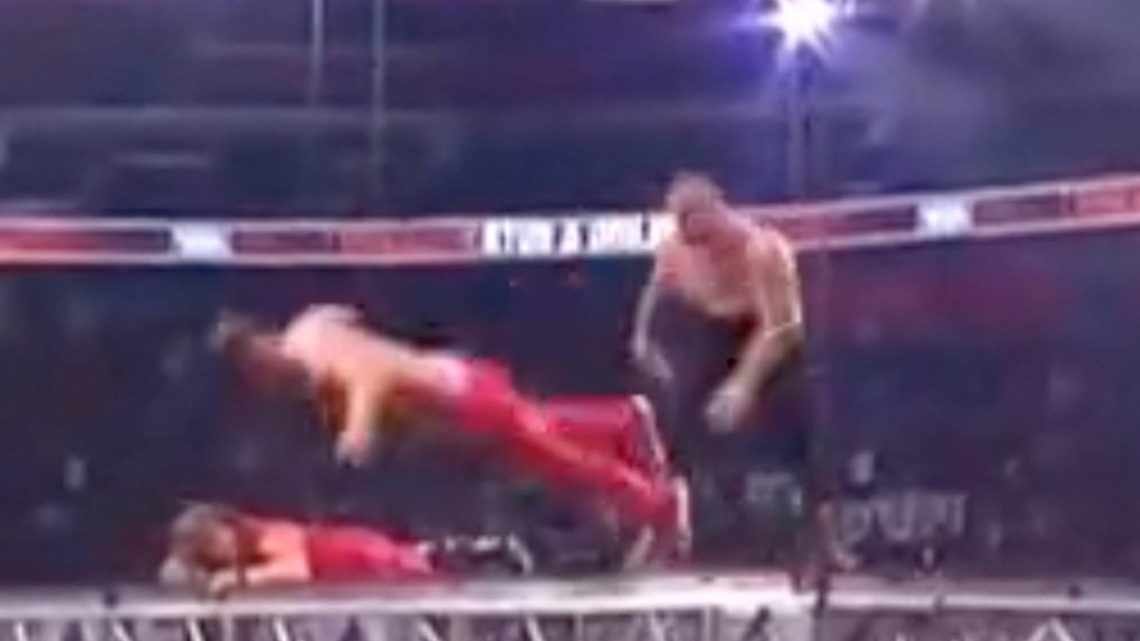 AEW star Eddie Kingston gave new meaning to the word extreme during a wrestling match Wednesday … ’cause he threw Sammy Guevara off the top of a cage — sending him crashing through a timekeeper’s table about a dozen feet below!!

It all went down last night at the Little Caesars Arena in Detroit … during the main event of AEW’s “Blood & Guts” show — which featured a six-on-six, cage match between Jericho Appreciation Society vs. Blackpool Combat, Kingston, Santana, & Ortiz.

The match featured two rings, one cage, a bunch of weapons, and a ton of blood … and the only way to win the contest was by submission or to get your opponent to surrender.

During the match, as expected, the combatants made their way to the top of the unforgiving steel structure … where Kingston threw Guevara off as Jericho watched nearby.

Guevera crashed landed through the structure … all while Kingston looked on with a deranged expression.

The spot in the match was insane … and the raucous crowd, who could barely stay in their seats for the duration of the show, became unglued.

Of course, WWE fans have seen similar moments before … back at “Hell In A Cell” in June 1998, The Undertaker threw known dare-devil Mankind off the top of a cage in one of the most iconic moments in wrestling history.

Ironically enough, Kingston and Guevara’s viral moment came almost 24 years to the date Undertaker tossed Mankind … and it makes you wonder if they were paying homage to the legends.

As for the rest of the match … it was violent from start to finish, and in the end, Blackpool Combat Club, Kingston, Santana, & Ortiz picked up the W.

Missy Elliott Teams Up With Anitta On New Track ‘Lobby’

Middle-aged women always shoot me dirty looks because of my outfits but I don’t care, I feel sorry for them | The Sun
Entertainment