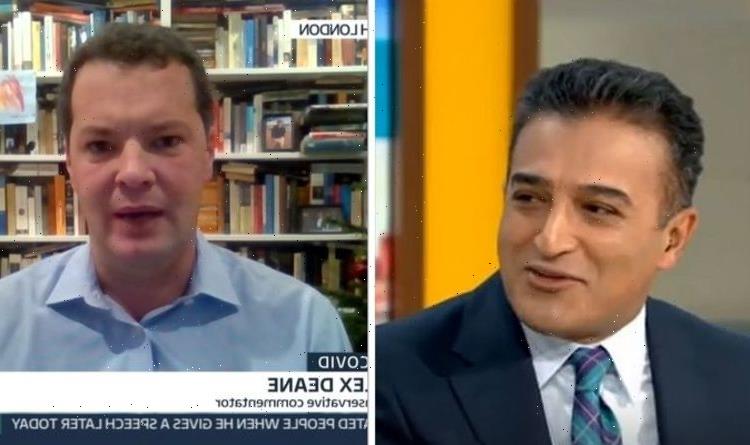 Good Morning Britain’s Adil Ray expressed frustration after having lost three family members as a result of the coronavirus pandemic. Discussing Boris Johnson, TV host Adil Ray got involved in a heated debate with a guest on December 21.

Adil spoke with Conservative commentator Alex Deane and journalist Nina Myskow about recently released pictures of Boris, 57, engaged in a party during lockdown with 18 other people.

Adil said: “At the start of the pandemic he was proudly saying he’s been shaking hands.

“He sets the tone, it’s leadership.

“It’s no surprise as a result of that that some of his staff think it’s OK to have cheese and wine parties because our very own leader has a complete disregard for the pandemic and the rules.”

Adil said that real responsibility should “come from the top.”

The commentator replied, accusing Adil of using the opportunity to criticise or “take down” the Prime Minister.

Adil then said: “I don’t care whether it’s Boris Johnson who is Prime Minister or not.

“I’m talking about people like me who lost people during this pandemic. Over 140,000 people.

“I lost three relatives, so don’t say to me I’m trying to be political.

“There are people out there thinking, ‘Why is he able to have cheese and wine in his garden and there are some people who weren’t able to see their loved ones?'”

He then urged Alex to think about others.

Adil also recently went after Dominic Raab for his actions.

Adil asked Dominic why there was a special rule for Downing Street, as the politician replied that “it’s not a special rule, it’s the same rule. It was a place where work meetings were held”.

“In any setting where they were conducting their work -”

He began, but Adil cut him off and asked him to give an example, leaving Dominic angry: “Sorry, you’re doing the usual thing of trying to -“

Adil then bit back, saying that Dominic was failing to answer the question.

Dominic concluded, saying: “The point I’m making is that there are different rules for work settings and social settings and the rules were followed and there were a series of meetings.”