Home » Celebrities » Adele reacts to Skepta dating rumors: Who is the rapper she was said to be dating? Adele reacts to Skepta dating rumors: Who is the rapper she was said to be dating?

Adele has reacted to media rumors that she is dating rapper Skepta (Joseph Junior Adenuga). The When We Were Young singer says she is still single.

Adele, 32, took to Instagram on Wednesday to refute recent media reports that she and rapper Skepta are an item. She appeared to reference the dating rumors in her lengthy Instagram post.

She started her Instagram message by speaking about her recent appearance as a host on SNL, saying that she had the “best time” there.

Adele thanked the cast, crew, writers, and producers of the NBC show, describing them as a “sublime bunch of people.”

She also thanked several other people, including her fans and the audiences at the dress rehearsal and live show.

Adele concluded her post by writing, “Happy Halloween! I’m going back to my cave now to be the (single) cat lady that I am! Peace out til next year.” 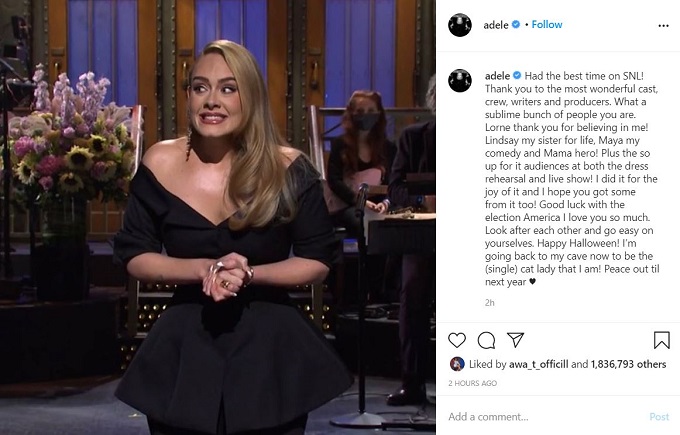 Fans have been speculating about Adele and Skepta’s relationship for months, following reports that the two have been hanging out since Adele split from her ex-husband Simon Konecki.

However, Adele’s Instagram post appeared to be in response to a report by PEOPLE that a source confirmed that she and Skepta were dating.

The source reportedly said that “things have been heating up” between Adele and the 38-year-old rap star.

“They run in the same circles in London, and she’s having fun,” the source reportedly added.

Adele and Skepta are longtime friends. PEOPLE reported that both have common interests in music and share the same neighborhood in Tottenham, North London.

Skepta revealed in a 2016 interview with the U.K.’s Evening Standard that he and Adele were close and that they texted each other a lot.

Adele has been single since she announced her split with ex-husband Simon Konecki in 2019. She filed for divorce from Konecki back in September 2019, after seven years of marriage. Adele and Konecki share an eight-year-old son, Angelo.

Adele also made the headlines earlier in 2020 after a dramatic weight loss transformation.

Who is rapper Skepta?

Skepta (Joseph Junior Adenuga) is a rapper and songwriter from Tottenham in North London. He is 38 years old (born on September 19, 1982).

He was born to Nigerian immigrant parents Ivy and Joseph Adenuga. Skepta has three siblings, including fellow rapper JME, Jason, and Julie Adenuga, who is a broadcaster.

He released his debut album Greatest Hits in 2007. He also released Microphone Champion in 2009.

His hit singles include Shutdown and That’s Not Me from his album Konnichiwa.

Skepta is also an actor known for playing Leon in the 2015 movie, Anti-Social. He was rumored to be dating supermodel Naomi Campbell in 2017.

Skepta has a two-year-old daughter, River, from a previous relationship.

Amazon Launched a Massive Sale on Women’s Pajamas, Underwear, and Bras That Start at $7
Entertainment