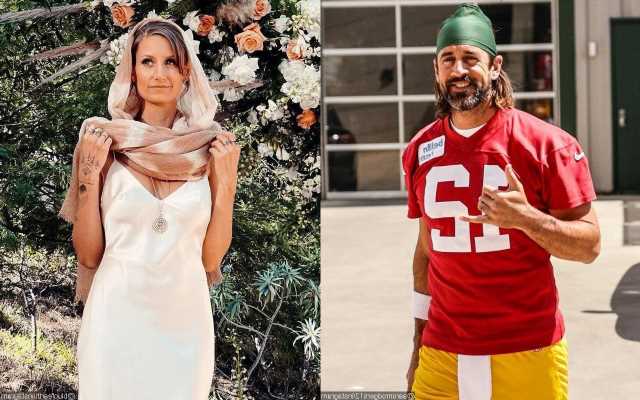 The football quarterback for the Green Bay Packers is romantically linked to Blu just more than a month after he sparked romance rumors with Wes Edens’ daughter Mallory Edens.

AceShowbiz –Aaron Rodgers‘ rumored girlfriend has finally responded to allegations leveled at her. Having been accused of being a “witch,” the woman, whose name is Blu, insisted that the gossips were untrue.

Blu set the record straight via Instagram Story on Thursday, June 9. “Ps… My name is Blu. Not Blu of Earth,” she penned, before adding in another post, “I do not identify as a witch. Y’all are hilarious.”

Blu, however, did not deny the dating speculations between her and Aaron. The romance rumors themselves emerged earlier this week after a photo of the two made its way on social media.

According to her Instagram page, Blu is the founder of Florescence, a “modern mystery school for women to reclaim the magical, radically authentic, wise, wild, unapologetic you.” She also hosts a podcast called “DeJa Blu”, which is described as “a clean reservoir of consciousness from which souls thirsty for purity, relief and love can drink.”

Blu was not the first woman who was linked romantically to Aaron after he and Shailene Woodley called off their engagement. In April, he attended an NBA game with Mallory Edens, the daughter of Bucks co-owner Wes Edens.

The athlete was seen in good company for the first-round playoff game between the Bucks and Bulls in Milwaukee. He sat courtside beside the model as well as his teammate Randall Cobb inside the Fiserv Forum while cheering on Milwaukee Bucks.

“Always rockin with my squad @bucks,” Aaron captioned his post on Instagram Story. In a separate post, he uploaded a snapshot of the courtside crew that included Packers wide receiver Randall and Mallory.

The NFL star and the “Divergent” leading lady called it quits earlier this year. Despite the split, the two was spotted spending time together on quite a few occasions, leaving fans to speculate about their current relationship status.

Machine Gun Kelly Is More Of A 'Bridezilla' Than Megan Fox?!?
Entertainment