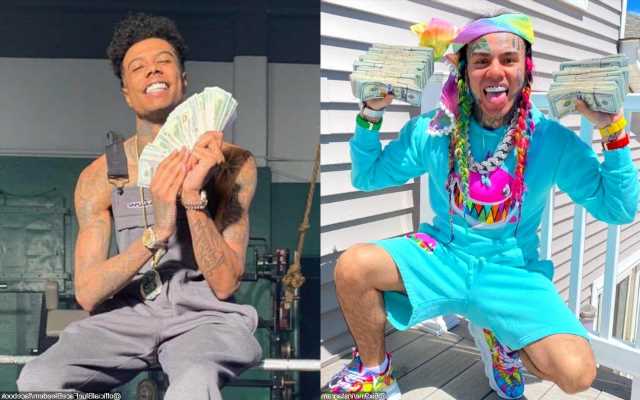 Takashi Matsuba claims that the ‘TROLLZ’ rapper, real name Danny Hernandez, has ruined his reputation for bringing his name in his documentary called ‘Supervillain: The Making of Tekashi 6ix9ine’.

AceShowbiz -Tekashi69 a.k.a 6ix9ine has found himself in legal trouble. Just one day after he was caught in a back and forth with Blueface, the “TROLLZ” rhymer is said to have been slapped with a defamation lawsuit by a Japanese tattoo artist for calling him a “heroin addict.”

Takashi Matsuba filed the suit in a New York City court. According to the documents obtained by TMZ, he claimed 6ix9ine has defamed him in the latter’s March documentary called “Supervillain: The Making of Tekashi 6ix9ine“.

6ix9ine, real name Danny Hernandez, said in the doc, “There was this tattoo artist named Takashi from our neighborhood. And he was this heroin addict. He did heroin to create. He did it to get himself in his little world. He did it to be himself.” He then admitted, “And that’s where I got the name Tekashi from. And that’s who I am.”

Takashi also stated that 6ix9ine brought his name in his Hulu documentary, “69: The Saga of Danny Hernandez“. In it, Takashi’s name indeed appeared on the screen as the director narrated, “Peter’s roommate, a Japanese tattoo artist named Takashi would inspire Danny’s new persona, Tekashi69.”

In his filing, Takashi alleged that 6ix9ine “has created confusion and the false public perception that” they are associated with one another while they aren’t. The artist also noted that 6ix9ine’s quote about heroin in the doc is damaging to his profession because “tattooing requires the use of needles, and heroin is connected in the public’s mind with hypodermic needles.”

Takashi said he already asked producers to remove his name, picture and likeness from the Hulu doc. However, the producers allegedly refused his request, prompting him to launch the legal action.

The news arrived just one day after 6ix9ine and Blueface traded shots over the latter’s new body art. It began after the “GOOBA” spitter poked fun at the “Respect My Cryppin” rapper for getting his jeweler’s name tattooed on the side of his head. He said, “He definitely owed them money for unpayed jewelry.”

Getting offended with the comment, Blueface clapped back at 6ix9ine by sharing videos of his homeless father and abused baby mama, Sara Molina. He also challenged 6ix9ine to a boxing match. However, the Brooklyn native declared that he’s “done responding” to the former and decided to put the jabs on social media only.

“My family is hurting:” Family of Leneal Frazier speaks out after fatal police pursuit crash