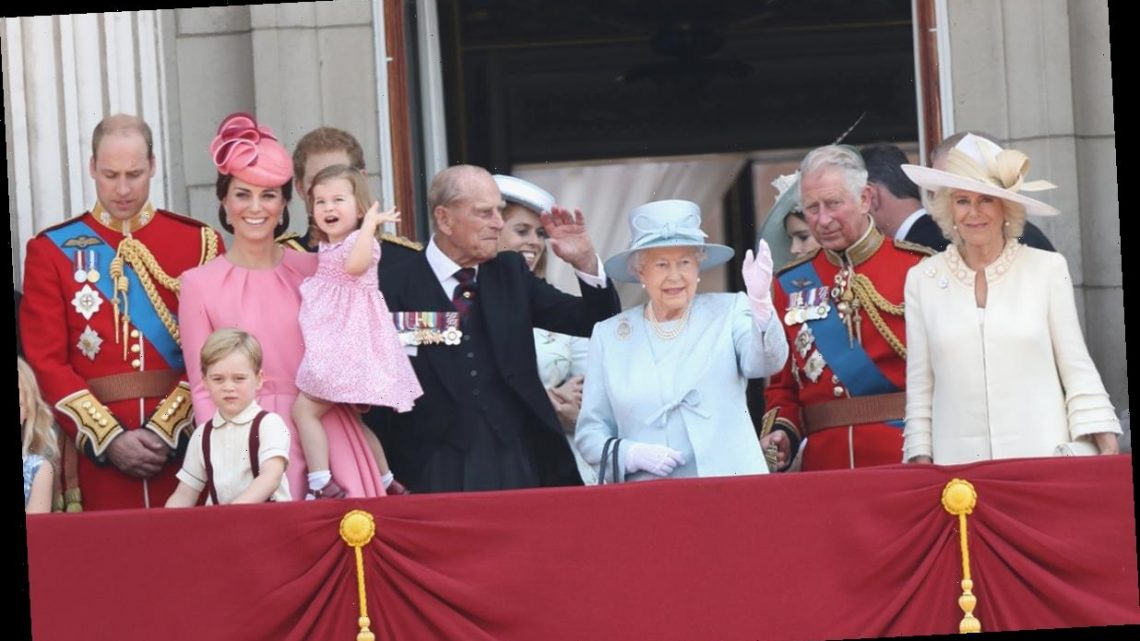 20 of the royal family’s sweet and unusual nicknames revealed

We may know them by their official titles, but behind the scenes, the royals have their own fun nicknames for each other. Did you know the Duchess of Cambridge was nicknamed "Squeak" at school, and later the "Princess-in-waiting" by her Marlborough College school friends – long before she actually met Prince William?

Prince Charles and Duchess Camilla had some unusual nicknames for one another when they dated in their twenties. As seen on season four of The Crown, the now-married couple apparently called one another 'Fred' and 'Gladys', inspired by characters from BBC radio’s The Goon Show.

The Duchess of Sussex revealed her sweet nickname for Archie, as she and Prince Harry celebrated their son's first birthday on 6 May 2020. In a touching video, Meghan can be heard calling her little boy "Arch" as she encouraged him to turn the pages of his book, Duck! Rabbit!. The Sussexes read to Archie as part of Save the Children's "Save With Stories" campaign to help vulnerable boys and girls during the coronavirus pandemic.

It was recently confirmed that Prince Harry's nickname for his wife is in fact "Meg." The moniker was revealed in text messages from the Prince to the Duchess' father, Thomas Markle, which were disclosed in court documents in Meghan's privacy case against Associated Newspapers.

The Duchess of Cambridge

Kate was nicknamed "Squeak" as a young girl at St Andrew's School in Berkshire. She explained how the name came about while on a visit to the school years later. "I was nicknamed Squeak just like my guinea pig," she said. "There was one called Pip and one called Squeak because my sister was called Pippa and I was Squeak."

Popular at senior school, Kate was allegedly known as the "Princess-in-waiting" by her fellow Marlborough College pupils.

During a visit to Windsor Park stadium, Princess Charlotte's mother Kate got chatting to mummy blogger Laura-Ann, who revealed that the Duchess referred to her daughter as 'Lottie' instead of 'Charlotte' during their conversation.

Speaking to Laura-Ann's toddler son, George, Kate said: "Hello, what's your name? Hi George, what a cool name you've got, and you look very smart in your bow tie. It's very nice to meet you." Revealing their meeting on Instagram Stories, Laura wrote: "So then she asked how old Bertie is, and I said he is four and she said, 'Oh he's the same age as Lottie' – Charlotte, she calls her Lottie!"

MORE: When the royals show off their dance moves – including Meghan Markle and Camilla

The Duke of Sussex

During an interview with Tom Bradby for ITV documentary Harry and Meghan: An African Journey, the Duchess accidentally let slip that she affectionately calls her husband by his first initial. "In all honesty, I have said for a long time to H – that is what I call him – it's not enough to just survive something, that's not the point of life," she shared. "You have got to thrive. You have got to feel happy, and I think I really tried to adopt this British sensibility of a stiff upper lip." Meghan was speaking about the difficulties she's faced as a mum and a royal living in the spotlight.

MORE: All the times the royals have cried in public – from Kate Middleton to the Queen

She goes by Bea among her family and friends, but her younger sister Princess Eugenie appears to have an even more special nickname for big sis Beatrice. To celebrate Beatrice's 31st birthday in August 2019, Eugenie uploaded a carousel of images, including this sweet selfie of the pair on a country walk. Eugenie wrote: "You have been bossing it since before I was born and continue to be the most wonderful person, friend and big sister…" She affectionately concluded the caption: "Happy Birthday to you Beabea!! Xx."

In early 2019, Prince George surprised a local dogwalker in Berkshire when he said that his name was Archie. According to The Sun, a member of the public came across the royal children and Carole Middleton while they were playing by a stream near the Middleton family home.

The woman, who did not want to be named, said: "I was asked by a police minder not to take a photo of the children, which I didn't, but George started stroking my dog. Just to be friendly I engaged in a bit of small talk and I asked George what his name was, even though obviously I knew it."

The woman continued: "To my astonishment he said 'I'm called Archie' with a big smile on his face. I don't know why he calls himself Archie but kids often play with their names and I think it's lovely." It's not known whether George uses the nickname within his family, or whether he uses it in public for security reasons.

Meghan revealed another adorable nickname for her baby son during the Sussexes' tour of Africa, as little Archie took part in his first official royal engagement. A video from the day shows Meghan with Archie in her arms, saying, "Say hello! Hello, hi!" before realising he is dribbling and exclaiming, "Oh, Bubba!" The Duchess again appeared to use the nickname in a video shared on Harry and Meghan's Instagram Stories, as the trio walked to meet Archbishop Desmond Tutu and his daughter Thandeka Tutu-Gxashe.

During their informal meeting, Meghan further revealed that her baby son likes to flirt! Little Archie let out a giggle when Thandeka laughed, prompting his proud mum to ask, "Is that funny?" Thandeka remarked that Archie appeared to understand what Meghan was asking, to which Prince Harry said, "I think he knows exactly what is going on." "You like me best, yes?" Thandeka asked Archie. "Oh, you like the ladies better, yeah?" "He likes to flirt!" Meghan agreed.

MORE: This is what it really takes to be Kate Middleton's children's nanny

Prince William revealed that his mother Princess Diana used to call him "Wombat". In a 2007 interview with NBC's Matt Lauer, he explained: "It began when I was two. I've been rightfully told because I can't remember back that far. But when we went to Australia with our parents, and the wombat, you know, that's the local animal. So I just basically got called that. Not because I look like a wombat, or maybe I do."

Beatrice's mum Sarah, Duchess of York revealed the super cute name she calls her firstborn. Taking to Instagram to mark her daughter's 30th birthday, Sarah wrote: "Happy birthday my Trixie – Belle so proud of you xx."

She may be known as "Meg" by Prince Harry and her friends, but to her mum Doria Ragland, the Duchess of Sussex will always be "flower". In her now-closed Instagram account, Meghan used to share plenty photos of flowers (including her favourite – peonies) and once revealed in a post: "My mum has always called me 'flower'. Nickname since I was a little girl."

As for her dad Thomas Markle, Meghan revealed that he calls her "bean". In a sweet Father's Day post from 2016, the former actress thanked her dad for "my work ethic, my love of Busby Berkeley films & club sandwiches, for teaching me the importance of handwritten thank you notes, and for giving me that signature Markle nose." She signed the post: "I love you xo – Bean."

As a little girl, the Queen referred to herself as "Tillabet". As she grew up, she became known as "Lilibet" among her family and close friends – and some of them still use the affectionate nickname for the monarch.

Prince Harry's friends refer to him as "Spike". The young royal had a Facebook account that used the pseudonym "Spike Wells" for four years until it was shut down because it posed a "security risk".

Prince William's full name is William Arthur Philip Louis but he is affectionately known as "Wills" to friends and the public. While studying at the University of St Andrews in Scotland, the future King was known as "Steve" to keep a low profile and avoid any unwanted attention.

The Duke of Edinburgh's pet name for his wife came to light after the 2006 film The Queen was released. In a bedtime scene at Balmoral, Philip says to Her Majesty, played by Dame Helen Mirren, "Move over, Cabbage."

During a day out at the Chelsea Flower Show in 2016, Prince William and Kate were overheard referring to each other as "darling" and "babe". While inspecting a poppy display, William asked his wife, "Could you make one of these, darling?"

The Duke of Kent

The Queen's cousin the Duke of Kent, who turned 85 on 9 October, is reportedly known as Eddie to his close family members. Prince Edward is the older brother of Prince Michael of Kent and Princess Alexandra.

It seems Prince Harry was right at home when he, William and Kate visited the Warner Bros. Studios in 2013. It turns out Harry's friends call him "Potter" as discovered by Canadian journalist Lisa LaFlamme when she met with him at Kensington Palace.

She wrote ahead of the interview that aired: "The title that caught my eye was the same one the Prince's communications director promptly put away – a picture book about Harry Potter. To his friends, 'Potter' is the Prince's nickname but apparently not something Palace PR would want to distract from our interview."

In their most recent interview with British Vogue, Princess Beatrice revealed her nickname for her younger sister Eugenie, saying, "Euge is amazing" and calling her a very "modern bride". In return, the bride-to-be referred to her big sis as "Bea". Their mother Sarah, Duchess of York is also known to call her younger daughter "Eugie".