12 Celebrities Who Dated ‘Dancing With The Stars’ Pros Off-Screen

IMO, the only thing more fun than watching celebs show off their ballroom dance skills on Dancing With the Stars is speculating about who’s romancing their dance-pro partners off-screen. Things can get pretty steamy on the dance floor, after all, and sometimes, telling the difference between a romance and showmance is next to impossible. While plenty of hot pairings simply had great chemistry, there have been celebrities who dated Dancing With the Stars pros IRL. Sadly, Hannah Brown isn’t one of those celebs, as she and Alan Bersten never actually dated off-screen. Sorry to disappoint.

Several DWTS pros are spoken for, as they’re already paired up with each other. Hayley Erbert and Derek Hough have been dating for five years. Emma Slater and Sasha Farber tied the knot in 2018. Jenna Johnson and Val Chmerkovskiy got hitched the following year. Peta Murgatroyd and Maks Chmerkovskiy are married with a son. However, there have still been plenty of hookups over the show’s 29-season run, and while not all romances between celebs and troupe members have lasted, some have led to engagements, marriages, and even families. Here are some of the most memorable DWTS off-screen relationships that have developed over the years.

Just about a year after divorcing This Is Us actor Justin Hartley, Selling Sunset‘s Chrishell Stause competed on Season 29 of DTWS and was paired with married dance pro Gleb Savchenko. Later in the season, when Savchenko announced his split from his wife of 14 years, Elena Samodanova, infidelity rumors surfaced due to Savchenko’s close bond with Stause. Stause denied the cheating rumors and, not long after, she revealed she was dating another dance pro, Keo Motsepe. During a December 2020 appearance on Nick Viall’s podcast The Viall Files, Stause said the relationship was still new, but she already seems pretty smitten. 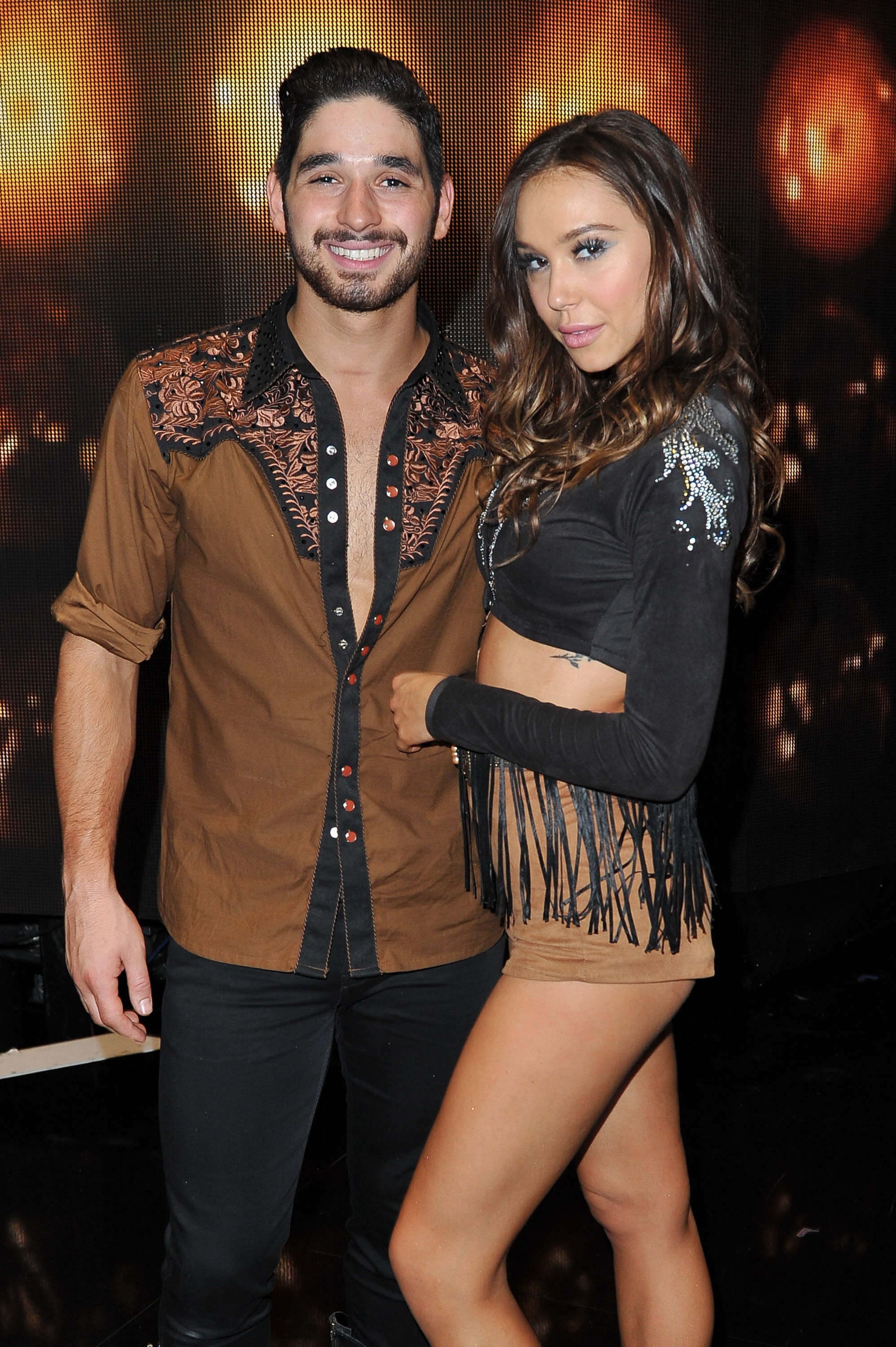 Before dating Noah Centineo, model Alexis Ren had a brief romance with Alan Bersten, her Season 27 DWTS partner. Fans instantly picked up on the chemistry between Ren and Bersten, and during an October 2018 episode of the series, Ren finally acknowledged her feelings for Bersten on camera. Though the partners ended up placing fourth, their romantic relationship reportedly fizzled out shortly after the season ended, per Us Weekly. In March 2019, Bersten seemingly confirmed the split when he told Us Weekly, "No more showmances for me. I’m done!" 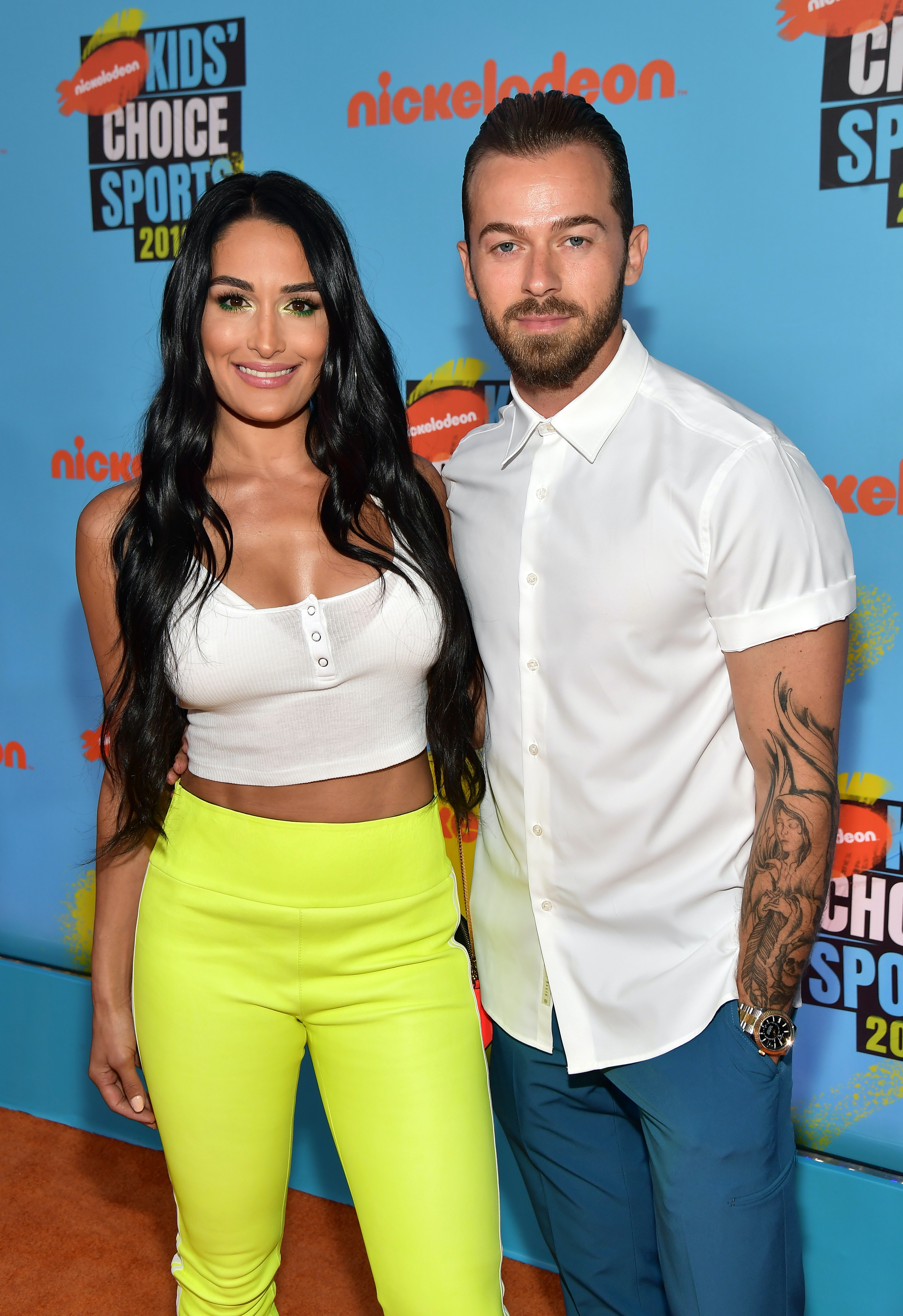 Though Nikki Bella and Artem Chigvintsev met back in 2017 when they were paired for Season 25 of DWTS, Bella was still in a relationship with John Cena at the time, to whom she was engaged twice before they officially split in July 2018. After going public with her new relationship in March 2019 during an episode of Total Bellas, an Us Weekly insider reportedly claimed the two had already been seeing each other "for a while." That November, Chigvintsev popped the question, and in July 2020, the couple welcomed their first son together. 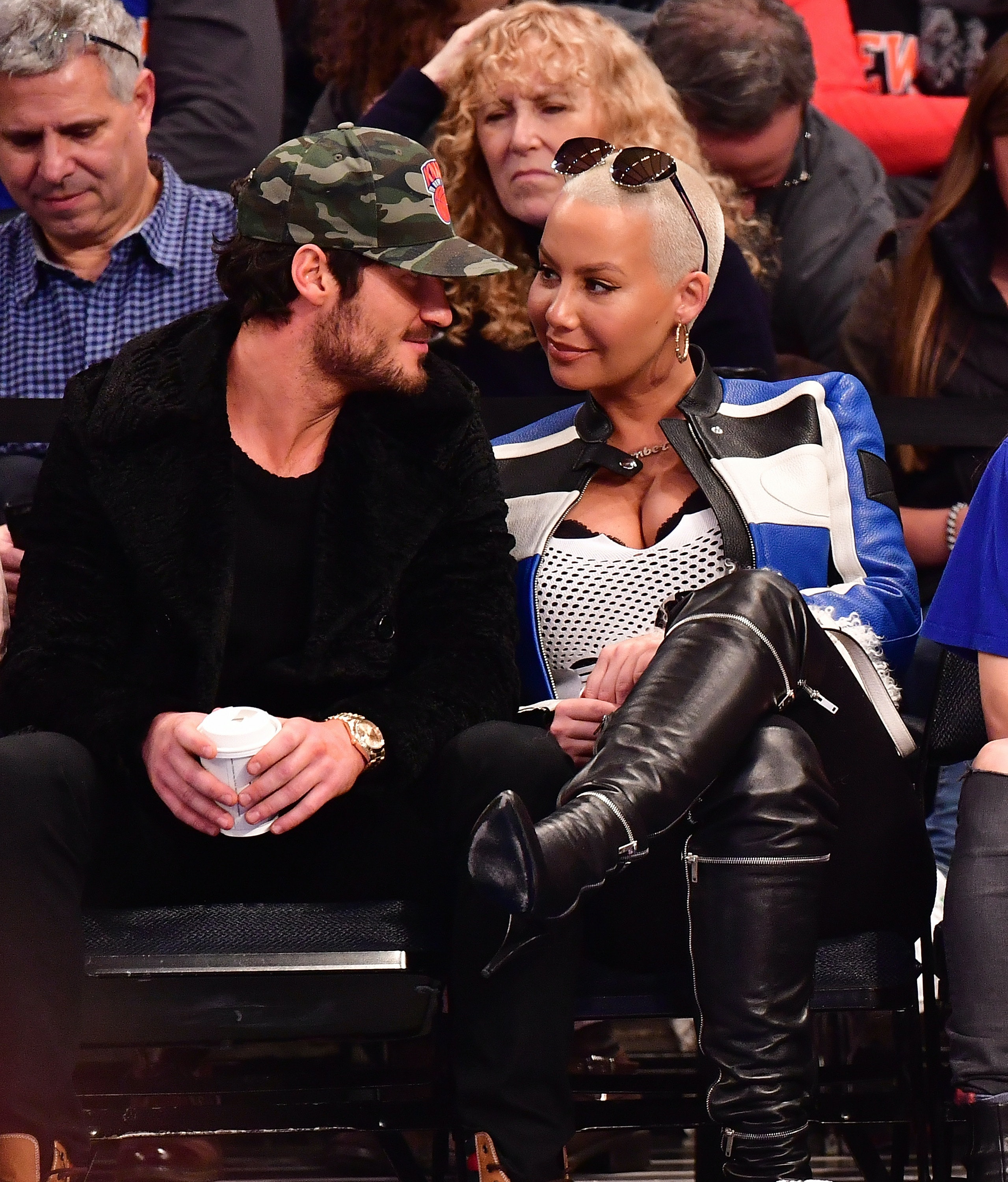 Model Amber Rose was paired with Maks Chmerkovskiy when she competed on Season 23 of DWTS, but she ended up romancing the dancer’s brother, Val, who is also a DWTS pro, instead. Dating rumors started circulating in October 2016, and not long after, Rose and Chmerkovskiy went public with their relationship. The two went on to date for five months before Rose announced their split on IG in March 2017. "[Val] and I broke up due to our own personal reasons but we still care about each other tremendously and we love each other’s families even more," she captioned the since-deleted post. 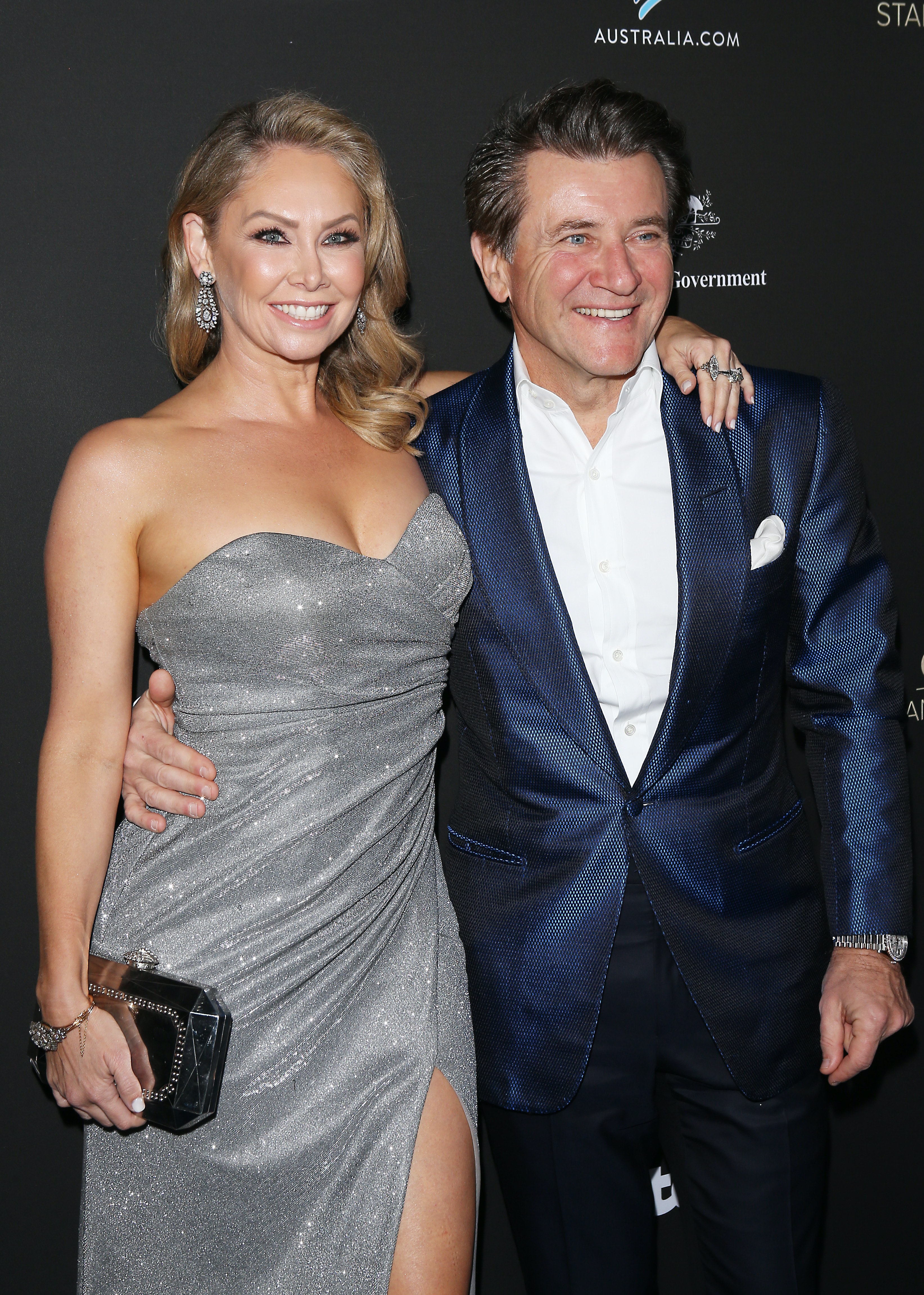 Soon after Robert Herjavec announced his split from his wife of 14 years in March 2015, Diane Plese, a source for E! News reportedly claimed the Shark Tank star was dating dance pro Kym Johnson, who he was paired with during DWTS Season 20. The two got engaged in February 2016 after less than a year of dating and tied the knot in July 2016. Later, the couple welcomed twins together in April 2018. 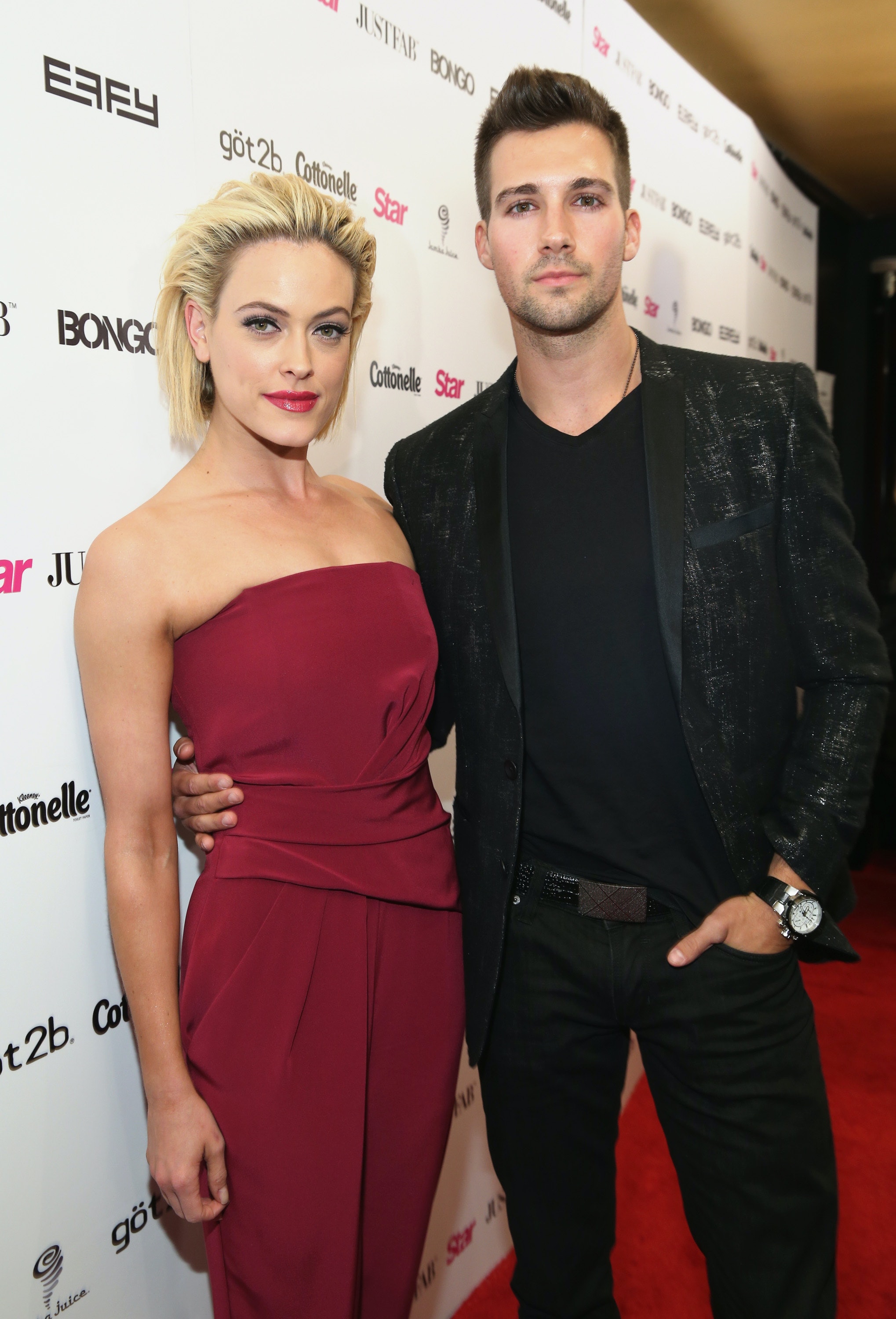 Rather than falling in love on the show, Big Time Rush alum James Maslow and his dance pro partner Peta Murgatroyd actually went on a date before the Season 18 premiere. After the single date, the two decided to just be friends — but that didn’t stop fans from shipping the two. "It’s fun, it’s all good, and I’m flattered because she’s beautiful and it’s not such a bad thing," Maslow told People in March 2014 when asked about the persistent romance rumors. "But really, we’re just here just to dance." 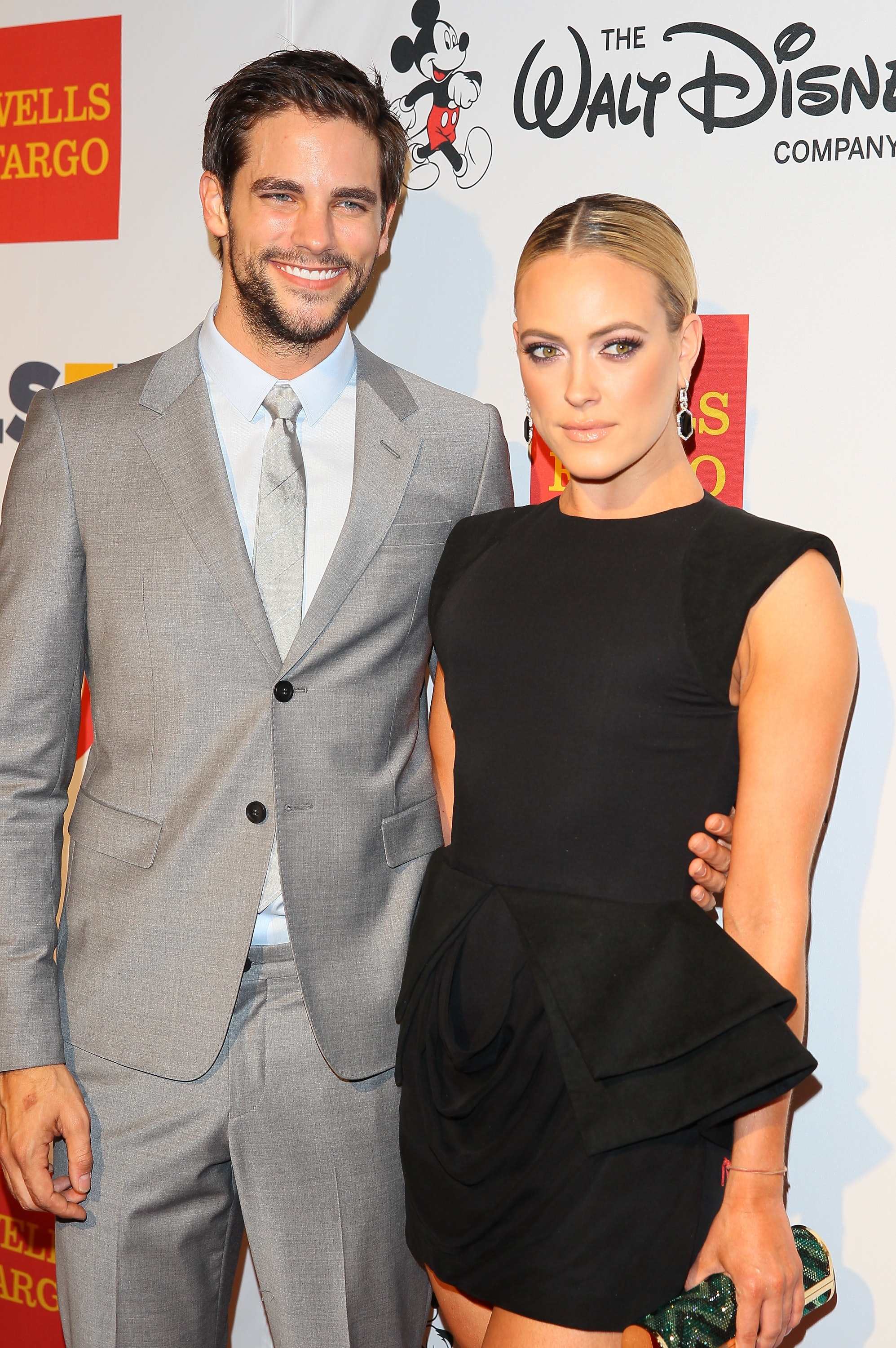 Before getting paired with Maslow, Murgatroyd reportedly hooked up with her Season 17 partner, Pretty Little Liars alum Brant Daugherty. A source for Us Weekly reported claimed the two made out at an event in December 2013, though Maslow denied dating rumors a month earlier. "For the one millionth time, no, we are not dating," Maslow told Celebuzz in November. "We are locked in a studio with a camera crew for five hours every single day. It’s not a place where something like that can really grow. We are very close though. We’re very comfortable around each other." 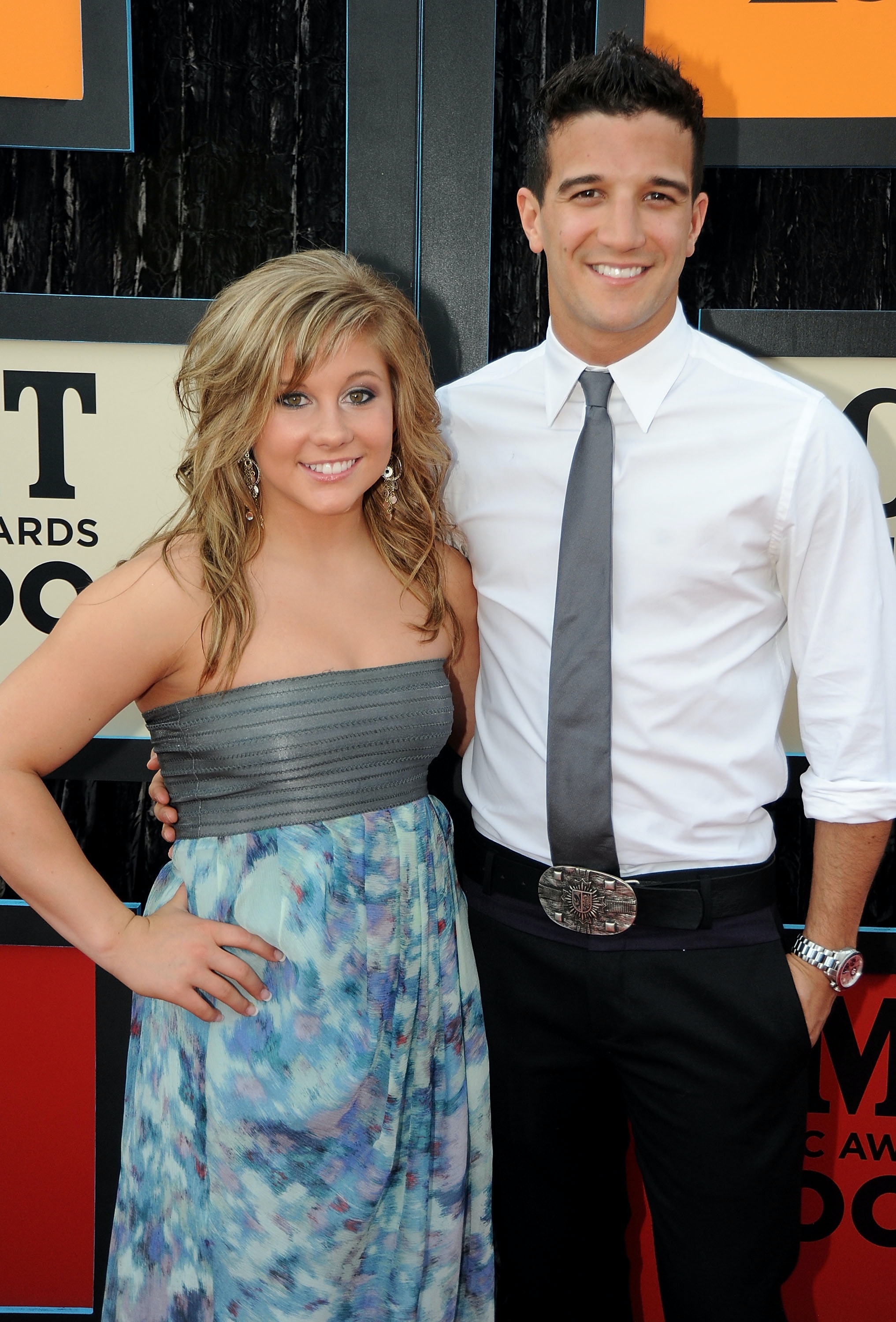 Olympic gymnast Shawn Johnson joined the DWTS cast for Season 8 and was paired with dancing pro Mark Ballas. Not only did the two win the Mirrorball Trophy — they also reportedly started up a romance. While neither Ballas nor Johnson ever confirmed their rumored relationship, there was reportedly a "nasty breakup," per the New York Post, which is reportedly why the two weren’t paired up again when Johnson appeared again on Season 15. 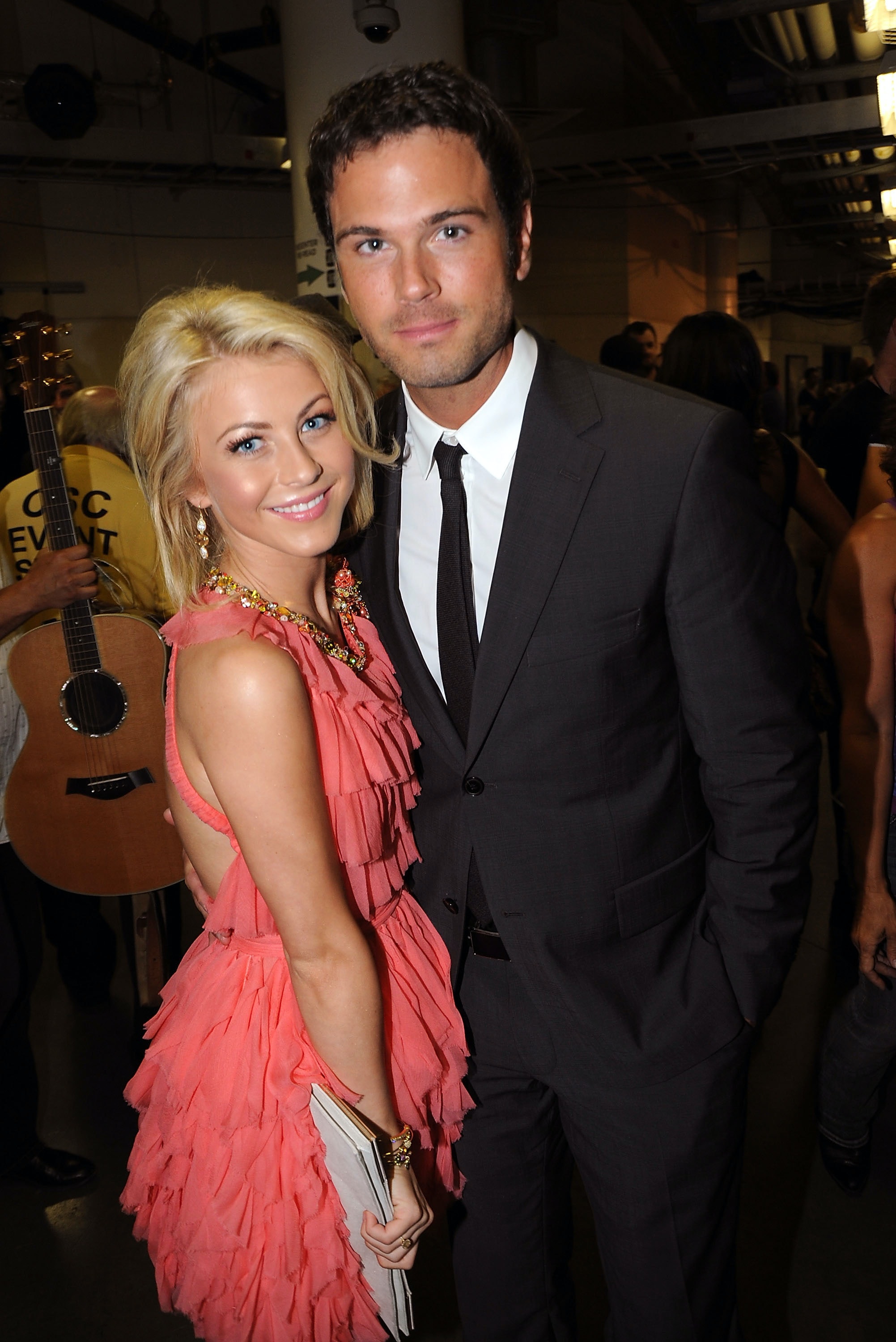 Country star Chuck Wicks and his dance pro partner Julianne Hough actually started dating before they appeared on Season 8 of DWTS. According to Hough, she and Wick met while on tour with Brad Paisley together, but after more than a year of dating and a stint on DWTS, the two reportedly decided to call it quits in November 2009. "This was mutual. They needed some time apart," a source reportedly claimed to People at the time. 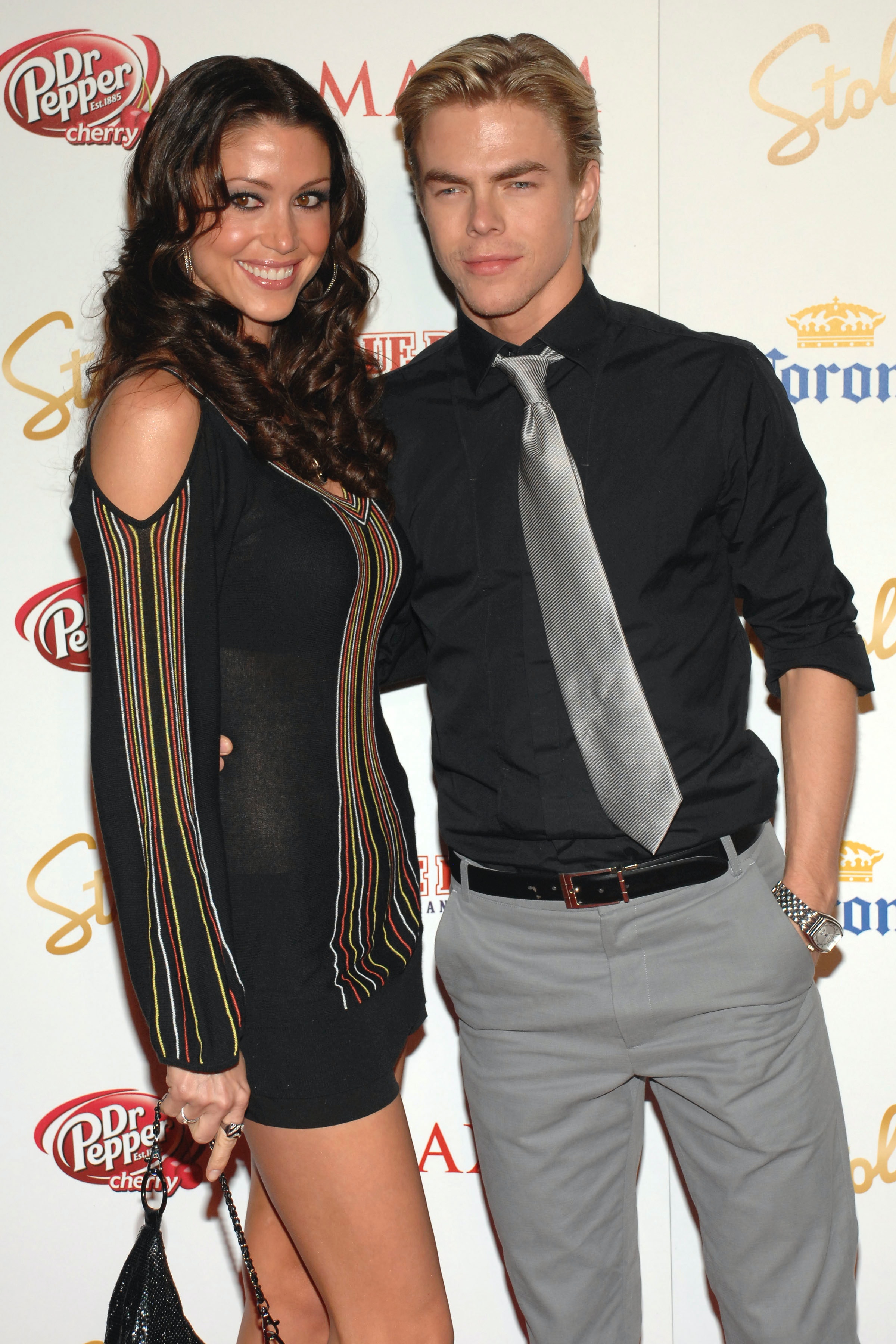 Julianne Hough wasn’t the only Hough sibling to romance a partner. Dancing pro Derek Hough was teamed up with American Pie actor Shannon Elizabeth during Season 6, and it wasn’t long before fans picked up on their intense chemistry. The two reportedly started dating while on the show, and they were reportedly together for more than a year before they announced their breakup with matching tweets in August 2009. However, the exes remained friends, and in March 2012, Elizabeth told Access Hollywood she and Hough had recently caught up over dinner. 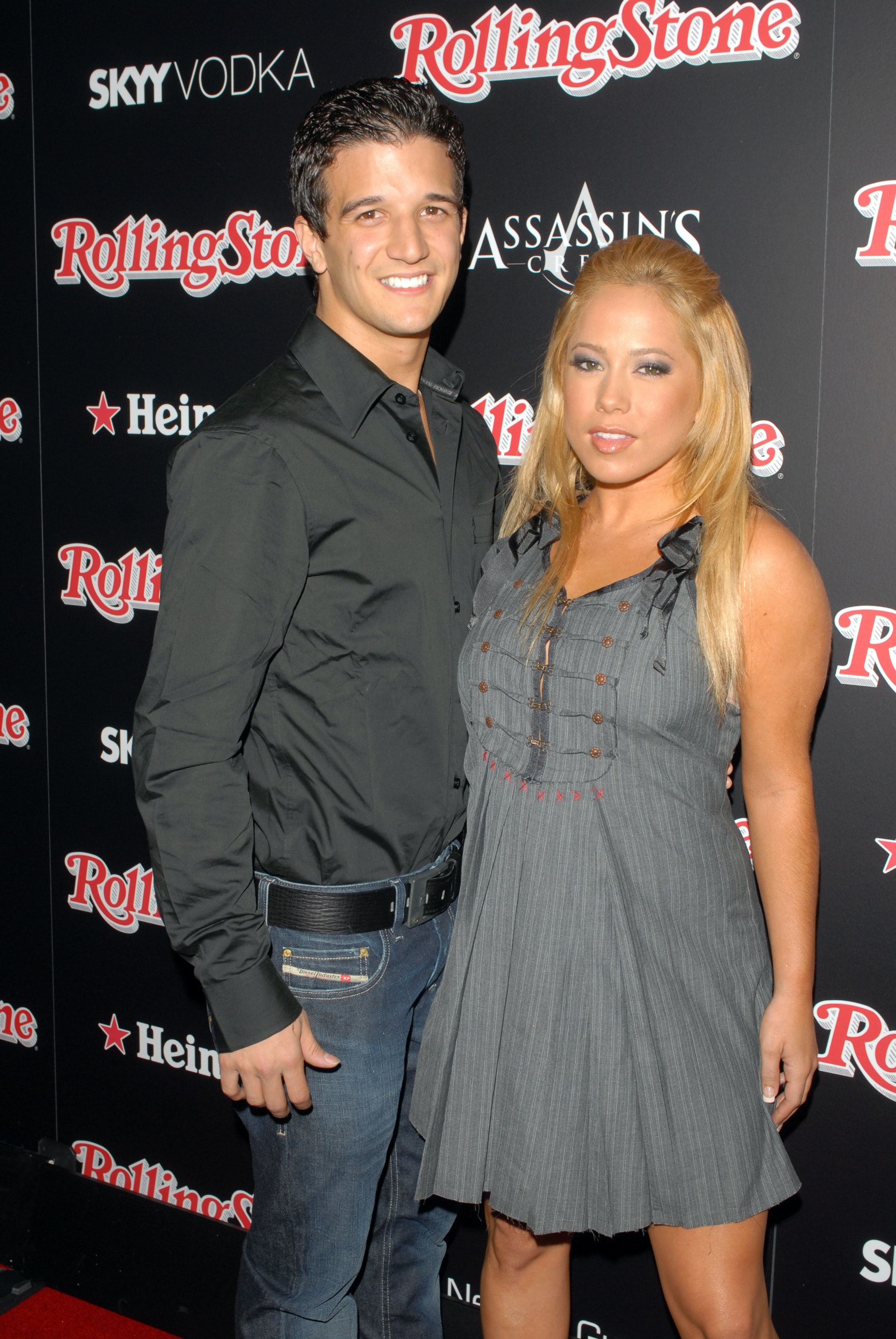 Before he reportedly romanced Johnson, Ballas dated his very first DWTS partner, Cheetah Girls alum Sabrina Bryan. The two were paired up during Season 5, and after they were eliminated, Bryan told TV Guide she and Ballas were dating. "We’ve been so focused on the competition," she said. "But now that that has died down, we’ll see where it goes." The couple reportedly only lasted a few months, but the exes seemingly remained friendly, and Bryan even returned the ballroom to cheer Ballas on during Season 6. 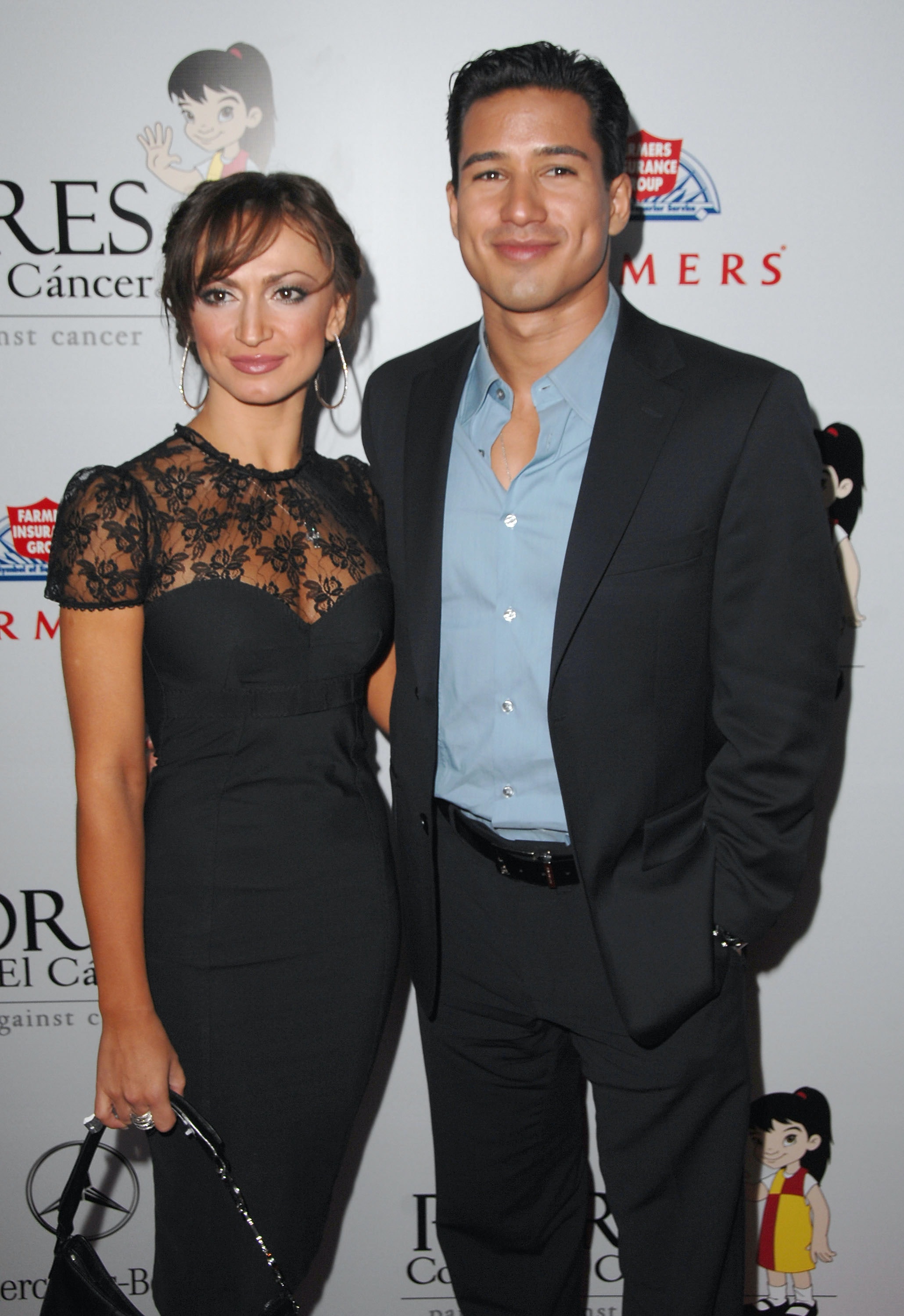 When Saved by the Bell alum Mario Lopez was paired up with Karina Smirnoff for DWTS Season 3, their connection was immediate. "I thought he was extremely hot and charming," Smirnoff told People in July 2008. "We actually tried to fight the attraction as long as we could. But obviously, that didn’t last too long at all." Smirnoff and Lopez were together for two years before rumors of Lopez’s infidelity caused the couple to split.

While ABC has yet to announce a 30th season, I’m already anticipating more showmances turned romances.

Feeling Stuck in Your in Relationship? How to Know If You Should Save It – or Split Up

Trader Joe's New Pizza Has a Unique Crust & No, It's Not Cauliflower
Entertainment