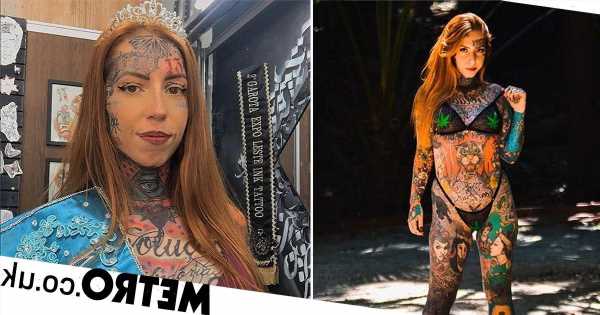 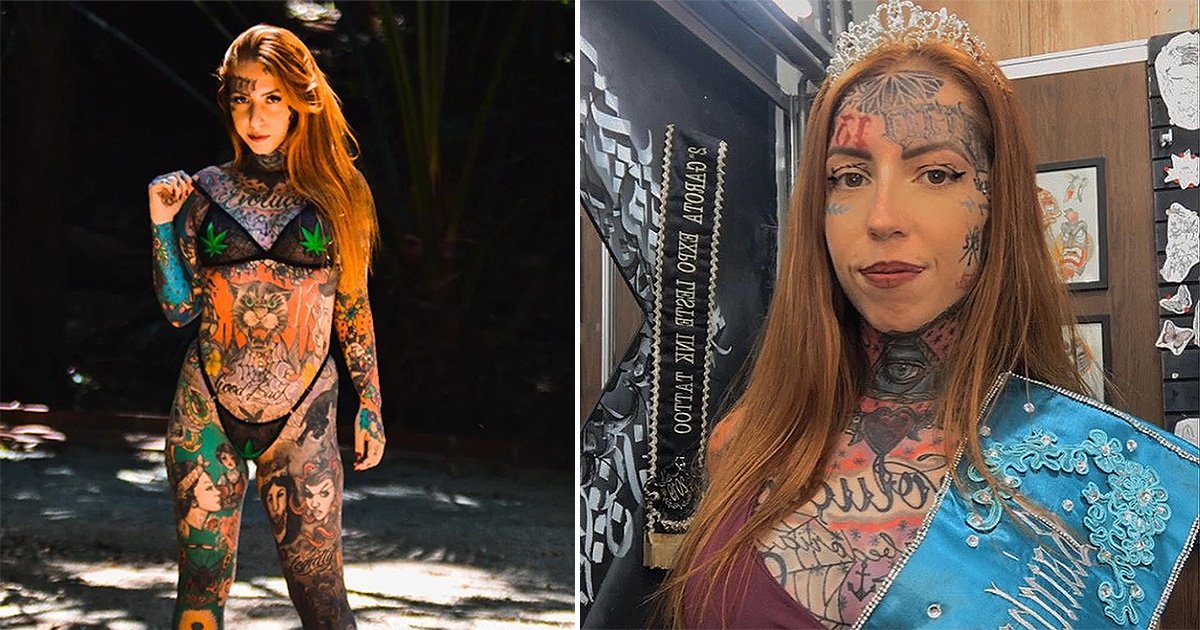 A woman with most of her body inked says it’s cost her a relationship with her parents, but she’s got no plans to quit going under the needle.

Aline Prestes, 28, a body piercer from Sao Paulo Brazil, has even won Miss Tattoo at conventions four times in the last three years.

Her tattoos have cost her a grand total of £10,000 over the years after she first fell in love with tattoos at 21.

Before this time, she felt lost and unhappy and struggled to determine her identity as a teen.

When she got into the world of body art, this all changed.

‘I was born in a small town,’ said Aline. ‘I am the youngest daughter, and my mother has always been strict with me. Although my older sister has tattoos, with me it was different.

‘I began body modification in the search for my identity. Like tattoos, it was the way to assume my autonomy.

‘Before getting my art I felt lost, very unhappy and overwhelmed by wanting to “be me” and having to repress myself for the sake of the family.

‘My mother always had a troubled relationship with me, while my father was more absent.

‘To this day, they don’t accept me. I barely see them to avoid conflicts. I started tattooing my face when I left the house.’

Even though the tattoos have put added strain on her relationship with her parents, Aline has no regrets.

‘I feel happy with the closed body of tattoos,’ she said.

‘Today I have a tattoo parlour and I work as a body piercer. I am a supporter of body suspension and I intend to study a lot so that in the future I will be a body modifier.

‘I got my first tattoo when I was 21 years old because I couldn’t take it anymore.

‘I keep getting tattooed, and the last tattoo I got was my son’s name on my forehead.

‘The most painful tattoos I got were on my back and my glutes were pretty tricky. Given I only have about 10% of my body left to be tattooed you can trust me on that.’

This year alone, Aline has earned two titles for her tattoos – she was crowned Miss Tattoo Queen at the Santa Luzia Tattoo Convention on June 28 2022, and Most Beautiful Tattoos at the Vale Tattoo Festival in San Jose on September 1 2022.

‘Most people say that I look great like this, that the tattoos suit me,’ said Aline.

‘They tell me that my tattoos are beautiful, super colourful and match me.

‘I get compliments, many people like it, many like mine and drawings, they say I’m very well tattooed, but there’s always a minority that criticises me.

‘My friends are all tattooed, they like it a lot and support it.

‘However, with my family, it is a different story. They don’t understand my taste for tattoos, they think it’s an exaggeration. In fact, they hate it.’

Aline cares not for the opinions of others when it comes to her tattoos, because they’re a vital part of her identity.

‘If that’s what you want for your life, focus on that,’ she advises, ‘and move on from all the noise telling you not to,’