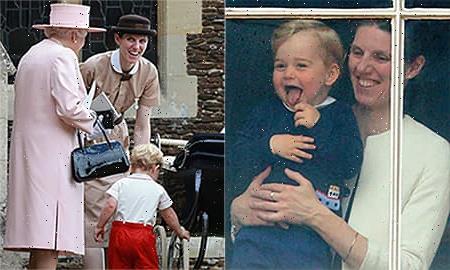 The Duke and Duchess of Cambridge are known for their hands-on approach to parenting with their three children Prince George, age eight, Princess Charlotte, seven, and Prince Louis, four.

MORE: 12 sweetest photos of royal children and their nannies

However, despite being there for school drop-offs, meal times and those all-important childhood milestones, the couple still require a little help due to their busy schedule of royal engagements – and that’s where their nanny Maria Teresa Turrion Borrallo comes in.

Maria isn’t just any nanny though, she’s what some might call a ‘super-nanny’ trained in all aspects of childcare specifically for the lives of high-profile families.

Want to know more about Duchess Kate’s personal nanny to her three children? Read on…

Duchess Kate’s nanny joined them in 2014

That’s right, Maria Teresa Turrion Borrallo was hired by the Cambridges back in 2014 to help care for baby Prince George when he was around eight months old.

Maria has been a part of the family ever since, now caring for Princess Charlotte and Prince Louis, too. Prince William had a nanny as a child with his brother Prince Harry, so the setup is familiar to him.

MORE: 8 times royal kids cooled off in the heat – from Princess Charlotte to Mia Tindall

Kate and William’s nanny attended England’s prestigious Norland College in Bath, which was founded in 1892 by educational pioneer Emily Ward and is known for producing top-rate nannies – many famous and royal families hire their nannies from Norland.

The College has a reputation as being at the forefront of early years education and training, offering an intensive academic degree and skills-based diploma programme. Norland’s values place children at the centre of all decisions with the mottoes ‘Love Never Faileth’ and ‘Fortis In Arduis’ (Strength in Adversity).

When Maria first joined the Cambridges’ household, Kensington Palace released the following statement concerning the nanny’s privacy: “As an employee of the Royal Household we would ask, please, that Maria’s privacy, and that of her family and friends, be respected,” said a palace spokesman.

“We will not be giving further details on Maria or her employment, except to say that the Duke and Duchess are of course delighted she has chosen to join them.”

Maria looks after Prince George inside the palace

Many people liken Norland nannies to Mary Poppins – and if you’ve seen their smart uniform you’ll understand why. The brown dress, hat and white gloves are an iconic outfit in childcare circles.

The Norland College website says of the uniform: “The Norland uniform is iconic and represents over 129 years of tradition and quality. When you wear the Norland uniform, you are demonstrating that you are training to offer the highest quality in care and learning for babies and young children. You are a highly visible representative of Norland College and it is both an honour and a responsibility to wear the uniform.”

The Cambridges’ nanny is trained in security too

We imagine that caring for the Duke and Duchess’ children is both a rewarding and precarious job – the royals are no strangers to security threats.

That’s why Maria is highly trained in this niche area, says royal commentator Victoria Murphy in an ABC News article.

She revealed: “The nannies are taught everything from defensive driving to security issues to how to care for a future king or queen. So she just really knows everything that you could possibly need to know about bringing up a child.”

The piece also explains that Norland nannies “learn everything from taekwondo to ward off would-be kidnappers to evasive driving makeovers to avert the prying eyes of the paparazzi.”

The Cambridge family on a night out together in London

Did you know that Prince George had another nanny care for him before Maria Boralllo?

Back in 2013 when George arrived in the world, the royal couple hired William’s former nanny, Jessie Webb, then 72, who was retired. Jessie made an exception and temporarily came out of her retirement to care for Prince George until Maria took over the position.

One word is banned in the Cambridge house

We were so surprised to learn of this, but one word is thought to be forbidden in the home of William and Kate.

Author Louise Heren, who wrote Nanny in a Book, spent a year at Norland College researching a documentary and told The Mirror that there is one word the nannies are taught never to say while at work with children. The word is simply ‘kids’.

Louise explained: “The word ‘kid’ is banned. It’s a mark of respect for the children as individuals.”

Given the fact this is a firm rule of the college, it’s highly likely that Duchess Kate’s nanny Maria also adopts it with the royal children.

All Norland students, including Duchess Kate and Prince William’s nanny Maria, have access to Norland College’s digital support service, Togetherall, which helps them deal with “everything from everyday stresses to major life events”, 24 hours a day, seven days a week.

The Norland website reads: “It’s a safe and anonymous online support and recovery space that you can go to if you’re feeling down, stressed, struggling to cope, or just want to talk to people who understand what you’re going through. It is moderated by trained professionals who are available 24/7 to ensure the safety and anonymity of all members.”