Drew Barrymore may look ageless, but that’s because she takes care of her skin. Like, really good care. This week, the actress released a series of videos about her beauty routine, and her favorite eye cream is surprisingly affordable. 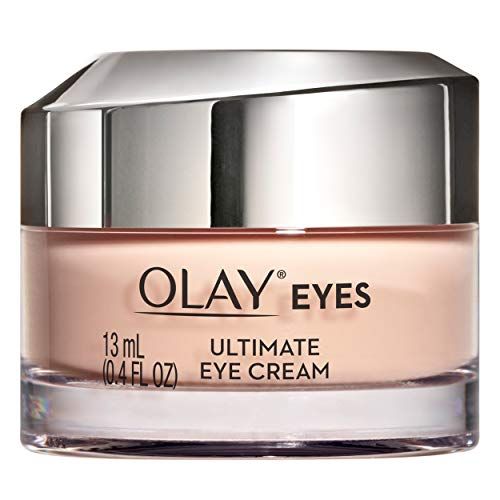 “The reason I love it is something I’ve talked about on this is if you can find an eye cream that actually has that peachy pigment, it will in itself fight…do you see? I mean, literally,” she explains in the video, pointing to her undereye circles (which, side note, aren’t that dark). “I like to dab it on, and what I’ll do is I will wear it out. Instead of concealer, I’ll go around with this eye cream on.” She doesn’t recommend applying concealer over the cream, which can curdle “like cream in a hot tomato sauce.”

Drew clearly knows what works—Olay Ultimate Eye Cream is Amazon’s top-selling eye treatment cream, and most of the reviews are glowing. Though the tint is peachy pink, the product description says that it “blends seamlessly with all skin tones.”

One reviewer with dark circles wrote: “I have no idea how or why, but within 2 days the grey was noticeably lighter. Now a week later, and the difference is crazy. As someone who has never used a product that ever lived up to it’s claims, I’m so confused!”

Another wrote:”Instantly, I looked more awake, and brighter — if that’s all it ever did it would have been good but no. The puffy ripple I’d developed under one eye is significantly diminished, and each time I pat pat pat this on, it seems to work better. The chronic dark circles are far brighter, the skin is velvety smooth, and I think it knocked a good ten years off my appearance.”

Your Daily Horoscope for Saturday, March 14